The Rebirth of the Cities after the Dark Ages 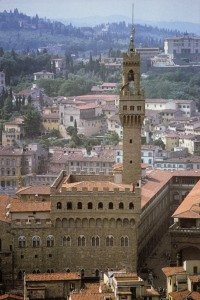 On and around the year 1000 AD the cities of Europe, and especially of Italy, turn a corner. After centuries of war and invasion, almost suddenly, there is peace. Travel on land ad sea is safer. Products move around more easily. People move around more easily. And thus during the Eleventh Century, there is a general resurgence of the European economy and especially that of the cities. The cities grow fast. They expand fast. They build bigger walls. They build huge new cathedrals and huge new city halls like the building on the right, the Palazzo Vecchio in Florence. In order to understand this phenomenon we will take one Italian city, Florence, and tell its story from the end of the Roman Empire in the sixth century to the great expansion of the twelfth and thirteenth centuries. Of all the possible choices for our study, Florence has a major advantage for our study: it was a Roman founded city, it declined as Rome declined, it surged back as all of Europe and Italy rebounded in the eleventh century. Its trajectory reveals exactly the Italian story of so many other cities.

The expansion of Florence in the Middle Ages.