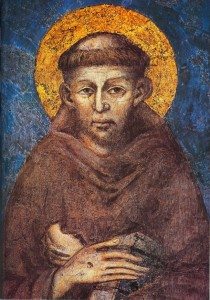 Saint Francis of Assisi (Italian: San Francesco d’Assisi; born Giovanni di Pietro di Bernardone, but nicknamed Francesco (“the Frenchman”) by his father; 1181/1182 – October 3, 1226) was an Italian Catholic friar and preacher. He founded the men’s Order of Friars Minor, the women’s Order of St. Clare, and the Third Order of Saint Francis for men and women not able to live the lives of itinerant preachers, followed by the early members of the Order of Friars Minor, or the monastic lives of the Poor Clares. Francis is one of the most venerated religious figures in history. Francis’ father was Pietro di Bernardone, a prosperous silk merchant. Francis lived the high-spirited life typical of a wealthy young man, even fighting as a soldier for Assisi. While going off to war in 1204, Francis had a vision that directed him back to Assisi, where he lost his taste for his worldly life. On a pilgrimage to Rome, he joined the poor in begging at St. Peter’s Basilica. The experience moved him to live in poverty. Francis returned home, began preaching on the streets, and soon gathered followers. His Order was authorized by Pope Innocent III in 1210. He then founded the Order of Poor Clares, which became an enclosed religious order for women, as well as the Order of Brothers and Sisters of Penance (commonly called the Third Order). In 1219, he went to Egypt in an attempt to convert the Sultan to put an end to the conflict of the Crusades. By this point, the Franciscan Order had grown to such an extent that its primitive organizational structure was no longer sufficient. He returned to Italy to organize the Order. Once his community was authorized by the Pope, he withdrew increasingly from external affairs. In 1223, Francis arranged for the first Christmas nativity scene. In 1224, he received the stigmata, making him the first recorded person to bear the wounds of Christ’s Passion. He died during the evening hours of October 3, 1226, while listening to a reading he had requested of Psalm 142. On July 16, 1228, he was proclaimed a saint by Pope Gregory IX. He is known as the patron saint of animals and the environment, and is one of the two patron saints of Italy (with Catherine of Siena). It is customary for Catholic and Anglican churches to hold ceremonies blessing animals on his feast day of October 4. He is also known for his love of the Eucharist, his sorrow during the Stations of the Cross, and for the creation of the Christmas crèche or Nativity Scene..  (Wikipedia) 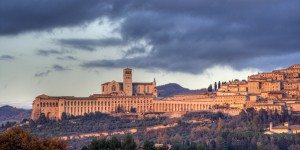