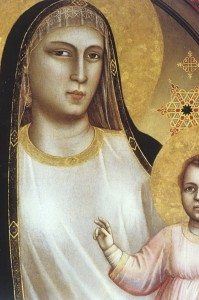 It was in Italy between 1000 AD and 1300 AD that a small number of painters completely changed the way that the art of painting presented the scene of human activity to the eyes of the viewer. Before that time, the Eastern Christian capital of Constantinople had exerted an overwhelming power over the artistic traditions of Christianity. But with the outbreak of the Iconoclastic Controversy which lasted during the 700’s and 800’s, and the decision of the Eastern Emperor to ban all representations of divine figures in art, suddenly the international art world changed. Artists who had been active in Constantinople rushed to Italy to continue their careers. And by 1000 AD, Rome was beginning to exercize a new power in Christian art. In the next three hundred years, the Greek style as some called it, was overturned and in its place Italian artists labored to develop a whole new native Italian style, a “Latin” style to replace Greek. The earliest efforts in this iconographic revolution took place in Rome but soon it expanded over all of Italy with Florence becoming the most advanced center of painting by the year 1300. The most important name in this new Florentine artistic leadership is Giotto. You see a detail of his Rucellai Madonna to the right. (The painting is in the Uffizi.) Below is a photograph of the Scrovegni Chapel which was painted by Giotto in 1305 to 1310 with stories of Jesus. It would be fair to say that this chapel contains the most revolutionary artistic heritage anywhere in the European world since the days of Rome. 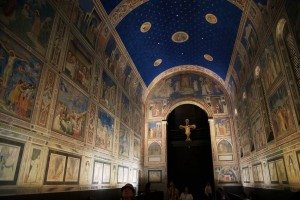