Italy and the Carolingians 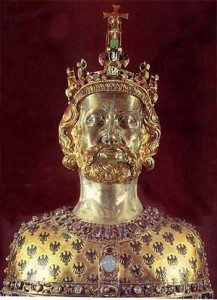 In the aftermath of the collapse of the Roman Empire, many new political entities arose within the former imperial domain: Lombardian Italy, Visigothic Spain, and Anlo-Saxon kingdoms.  The one most successful regime was that which was built by the Franks in northern France.  The heart of the Frankish kingdom was the Loire valley and the city of Tours.  Over a period of 300 years, the Frankish state expanded to include all of northern France, Belgium, south to the Pyrenees and north east into the Rhineland. And in the 700’s the dynasty of the Carolingians emerged to dominate the Frankish state with Pepin the Short being crowned as King of the Franks in 751.  The name of the Carolingians came from the founding father of the dynasty Charles Martel (Carolus, 688-741). Charles Martel’s son and successor was Pepin the Short, and Pepin’s son and successor was Charles the Big, or Charlemagne (742-814). At the time of the coronation of Pepin, the situation of the church in Italy had become desperate. Abandoned by the Eastern church in Constantinople, Rome was now at the mercy of the expanding Lombard state which controlled all of northern Italy. In 751, the Lombards took Ravenna which signaled the increasing isolation of the Roman church. In 754, Pope Stephen II searched for an ally to help him in the coming battle with the Lombards. The strongest state in Europe at the time was the Frankish state now ruled by Pepin the Short. In January, 754 Pope Stephen traveled to Paris to meet with Pepin and at the conclusion of their conference the two men made a deal that would drive the next 1000 years of European history: the Pope would crown Pepin as king and thus solidify his new position with the imprimatur of the Vatican, and in exchange Pepin would come to Italy with troops to take on the Lombards. Notice that at this point, no one is using the word, “Emperor.”  That will wait for Christmas, 800.  Various events intervened to push the most important confrontation forward for many years and it fell to Pepin’s son Charles (Charlemagne) to lead and win the assault on the Lombards and to receive the thanks of the Papacy on December 25, 800 in Rome. On that date Charlemagne was crowned with the new title: “Holy Roman Emperor.” And with this coronation was begun the 1000 year history of the Holy Roman Empire, about which Voltaire quipped: “It was neither Roman, nor Holy, nor an Empire.”

The Life of Charlemagne,

Vita Karoli Magni (Life of Charles the Great) is a biography of Charlemagne, King of the Franks and Holy Roman Emperor, written by Einhard. Historians have traditionally described the work as the first example of a biography of a European king. The author endeavored to imitate the style of that of the ancient Roman biographer Suetonius, most famous for his work the Twelve Caesars. Einhard's biography is especially modeled after the biography of Emperor Augustus, the first emperor of the Roman Empire. The date of the work is uncertain and a number of theories have been put forward. The inclusion of Charlemagne's will at the end of the work makes it fairly clear that it was written after his death in 814. The first reference to the work, however, comes in a letter to Einhard from Lupus of Ferrieres which is dated to the mid-ninth century. Dates have been suggested ranging from about 817 to 833, usually based on interpretations of the text in the political context of the first years of the reign of Louis the Pious and Louis' attitude to his father. Einhard's book is about intimate glimpses of Charlemagne's personal habits and tastes. He occupied favoured position at Charlemagne's court so he had inside information. Einhard received advanced schooling at the monastery of Fulda sometime after 779. Here he was an exceptional student and was quite knowledgeable. The word was sent to Charlemagne of Einhard's expertise. He was then sent to Charlemagne’s Palace School at Aachen in 791. Einhard then received employment at Charlemagne's Frankish court about 796. He remained at this position for twenty some years. Einhard's book was expressly intended to convey his appreciation for advanced education. He wrote his biography after he had left Aachen and was living in Seligenstadt. Einhard's position while with Charlemagne was that of a modern day minister of public works, so he had intimate knowledge of his court. Einhard was also given the responsibility of many of Charlemagne's abbeys.

From Publishers Weekly Christian warrior, scholar prince, pilgrim saint and emperor, Charlemagne (742–814) has influenced modern rulers from Napoleon to Charles de Gaulle. As acclaimed British historian Wilson (Tudor Tapestry: Men, Women, and Society in Reformation England) points out in this fast-paced biography, the Frankish king who was named emperor by the pope brought civilization and peace to Europe in the Early Middle Ages. An acquisitive king intent on expanding Francia's borders and connecting politics and religion, Charles the Great, according to Wilson, is responsible for the shape of Europe as we know it today. Wilson deftly chronicles Charlemagne's military exploits, political intrigues and religious devotion. In addition to his military leadership, the emperor initiated a revival of humane learning (the Carolingian Renaissance) and the establishment of a clerical hierarchy that could preach, administer the sacraments properly and oversee matters of the empire. Although, as Wilson points out, Charlemagne's sometimes megalomaniacal personality drove his armies to the brink of disaster, he fostered a unity and a culture in his empire that have lasted to modern times. Maps. Copyright © Reed Business Information, a division of Reed Elsevier Inc.