The Papacy and the Empire 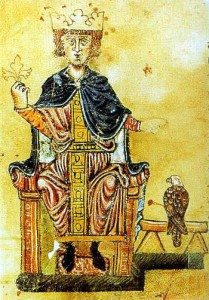 The two most important institutions of the Middle Ages in Europe were the Holy Catholic Church based in Rome and the Holy Roman Empire based in Germany or some other northern country.  These two institutions were seen as extending back into past history to the days of Jesus of Nazareth.  Both were seen to be eternal and universal.  The truth was something different.  The Holy Roman Empire was, as Voltaire remarked: “neither Holy nor Roman nor an Empire.”  But the mythology saw it as an extension of the real Roman Empire.  The idea was that the Roman Empire had not declined and ended but had continued in the form of this newer “Holy Roman Empire” founded by Charlemagne and Pope Leo on Christmas Day in the year 800 AD.  The Holy Catholic Church in Rome was on more solid ground.  It most definitely was Roman.  It was a church, an international church.  And one would assume it was Holy.  In the Medieval vision, these two institutions were partners in the leadership of the whole Christian world. Pope and Emperor, like Charlemagne and Pope Leo, were to work together to bring about peace and unity in the Christian world. In reality, the two fought most of the time. And the rare moments of complete amity between pope and emperor were brief and historically insignificant.  But if the two institutions were competitors more than partners, they were, after all, the two institutions in the Middle Ages that mattered the most. This was especially true for Italy; more so for Italy than all the rest of Europe. One of the two institutions was based in the Italian city of Rome. And the second institution was led by the emperor who spent much of his time in Italy too. So whereas Englishmen might view both institutions as distant and unimportant, citizens of Italy most definitely did not.

The Holy Roman Empire was, according to Voltaire, neither holy, nor Roman, nor an empire. But it was long-lived, complex, brutal, important, and fascinating, as is evident from the reading of this notable work published in 1871 by the English jurist, historian and politician, James Bryce (1838 to 1922). Bryce concentrates his considerable erudition on the meaning and significance of the empire’s existence rather than on its chronology. This is an essential work for the understanding of western history.

By Lisa C. Philip on July 8, 2013 Format: Paperback." Even though this book was written over one hundred years ago it is still the best book on the topic. Packed with so much information. Highly recommended for anyone interested in the topic."