The Age of the Cathedrals

By 1300, the economic boom that had begun around 1000 AD was now fully underway and was bearing significant results in the great cities of Italy. Populations were exploding. The city of Florence had to expand its walls three times in a few hundred years. By 1300 Florence contained over 100,000 people. The same was happening in Venice and Milan. Trade was booming. Governments were experimenting with innovative ideas about elections and citizen’s rights. The most dramatic evidence of this new culture was to be seen in the various cathedral projects all over Italy. In Milan, Venice, Pisa, Lucca, Siena, and Florence, cities planned massive new cathedral buildings in the center of their city to mark its power and its prestige. The greatest of all these projects was that of Florence. In 1296, the city fathers gathered together to lay the cornerstone of what was to be the largest cathedral in Europe. And the building that emerged did indeed hold that title until Rome decided to build a whole new St Peter’s in 1510. 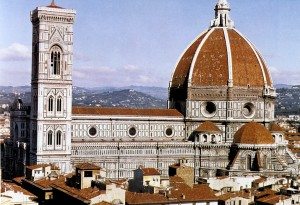