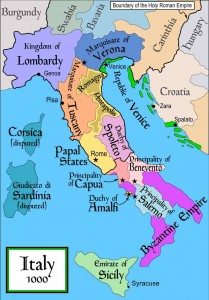 Europe approached the year 1000 AD with fear and foreboding at the same time that it experienced the most extraordinary leap forward. It feared the chronological marker. For one thousand years, Christians had awaited the Last Judgement, the Revelation, the Final Days. And the approaching year seemed obvious as the possible approaching end of all things. But on the hand, in the secular world, in the world of trade and economic expansion, Europe had not seen times like these since the Fall of Rome. So what was one to think? was everything coming to an end? Or was everything about to get better? The year 1000 is a fascinating moment in European and Italian history. In continental Europe, the Holy Roman Empire established itself as the most powerful state. Otto III made a pilgrimage from Rome to Aachen, stopping at Regensburg, Meissen, Magdeburg, and Gniezno. In Rome, he built the basilica of San Bartolomeo all'Isola, to host the relics of St. Bartholomew. In France, Robert II, the son of Hugh Capet, was the first of the Capetian kings. The Byzantine Empire under the Macedonian dynasty was sorely pressed by the ongoing Muslim conquests, losing many of its eastern territories in the Byzantine–Arab wars (780–1180). At the same time, Byzantium was instrumental in the Christianization of the Ukraine and of other medieval Slavic states. In Great Britain, a unified kingdom of England had developed out of the various Anglo-Saxon kingdoms. In Scandinavia, Christianization was in its early stages, with the Althingi of the Icelandic Commonwealth embracing Christianity in the year 1000. On September 9, King Olaf Tryggvason was defeated by an alliance of his enemies in the Battle of Svolder. Sweyn I established Danish control over part of Norway. Oslo, Norway, was founded in 1000. The papacy during this time was in a period of decline, in retrospect known as the saeculum obscurum ("Dark Age") or "pornocracy" ("rule of harlots"), a state of affairs that would result in the Great Schism later in the 11th century. Hungary was established in 1000 as a Christian state. In the next centuries, the Kingdom of Hungary became the pre-eminent cultural power in the Central European region. On December 25, Stephen I was crowned as the first King of Hungary in Esztergom. Sancho III of Navarre became King of Aragon and Navarre. The Reconquista was gaining some ground, but the southern Iberian peninsula would still be dominated by Islam for centuries to come; Córdoba at this time was the world's largest city with 450,000 inhabitants. (The preceding survey based on Wikipedia article on The Year 1000.)

The Year 1000: What Life Was Like at the Turn of the First Millennium,

Tuscan Countess: The Life and Extraordinary Times of Matilda of Canossa ,

La Contessa Matilda was the most important person in 11th Century Florence. She led the explosive revival of Florence; she endowed and encouraged the church; she rebuilt the architecture. This biography is the first one we have had in English that is really good and worth recommending.

From Publishers Weekly:
The dramatic life of Matilda of Canossa (1046-1115) could easily be the plot of a Pirandello play: there are papal intrigues, warring medieval factions and even an ill-fated marriage to a hunchback that ends in murder. Spike's marvelous biography of the countess takes on all of these events, and also explains how Matilda became an ardent defender of the lands in the Po Valley, which she considered her birthright. Spike deftly conjures the world of pre-Renaissance Italy, where a woman "passed through her life from father to brother, to husband, to son, as each in his turn acted for her welfare." Many of the men in Matilda's life, however, failed to act in her best interests, and under such conditions, the remarkable young woman flouted the traditions of her male-dominated world and managed to defend her small portion of Italy from Henry IV. Using a staggering amount of new research, Spike peels back layer upon layer of previous myth to render a startling new portrait of the countess. (The author also displays a novelist's talent for detail, exploring the unusual alliance between Matilda and Pope Gregory VII, her ally and lover.) Spike's first-person account of her exhaustive research is one of the book's unexpected pleasures; the modern-day characters she encountered during her hunt provide this engrossing historical chronicle with a richly personal subtext. 40 b/w illus.
Copyright © Reed Business Information, a division of Reed Elsevier Inc. All rights reserved.