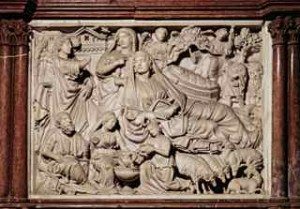 At the right you see Nicola Pisano, Nativiy, Carrara marble, Pisa Baptistry pulpit. Notice Mary and her Roman matron  face.  Pisano is copying Roman sculpture that is sitting there in Pisa.  From 1000 AD to 1300 AD, artists in Europe changed the look of Western art. The change took place with Italian architects, sculptors and painters leading the way. The art of scuplture allows us to follow the transformation without interruption from the Fall of Rome all the way forward to our period, 1000-1300, this Winter Quarter. In Italy alone, there is no permanent interruption in the production of art even in the worst of times. In some periods the production is small, but it still allows us to see the change take place. Italy had one major advantage over other European states: it had the Roman scuptural past sitting all around it. Thus the first hints of Medieval artistic change are visible in cities such as Pisa where the Roman sculptural remains are rich, and local artists such as Nicola Pisano and his son Giovanni Pisano, can lead the way, starting with their own local Roman past. To the right, you see Pisano’s Virgin Mary and she will remind you of a Roman matron.