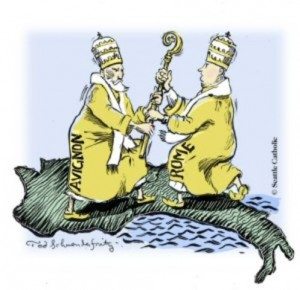 In Week 22, we studied the Papacy in Avignon. The popes stayed in Avignon from 1305 to 1382. By 1382, many in the church were aware that the continued French residency of the popes was damaging the international Christian church and so they began to organize to try to bring back the popes to Rome. Petrarch was one influential leader in this movement. He went to Avignon and begged the pope to bring the papacy back to Rome. Finally, on September 13, 1376, Gregory XI abandoned Avignon and moved his court to Rome (arriving on January 17, 1377), officially ending the Avignon Papacy. On April 16, 1378, a College of Cardinals in Rome chose an Italian, Bartolomeo Prignano, as Pope Urban VI. Urban turned out to be a terrible diplomat and a bullheaded leader who angered all the Frenchmen. One night they slipped out of Rome and traveled back to France where they elected a new French Pope: In 1382, an international effort led to the election of an Italian, Benedetto…..to the Papal Throne, and he promised to restore both the city and the institution to its former glory. But he alienated everyone and the French cardinals escaped Rome into he night, and elected one of their own as a new pope, Pope Clement VII, and now there were two popes. The Papal Schism of Europe. And it was going to get worse. The Papal Schism of the fourteenth century did terrible damage to the Papacy in the eyes of the faithful. The one greatest virtue that the Papal leader had always possessed was that he was the one true apostolic successor to Jesus. For 1300 years, pope after pope had been elected without interruption, to sit on the seat of St Peter. But with the outbreak of Schism, that claim was now laid bare. And everyone began to wonder whether the Papacy itself was flawed and worthless. Some suggested that maybe we did not need a Pope! 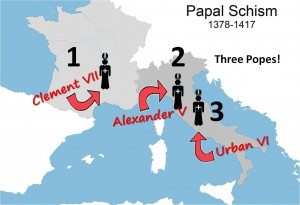