Painting in Italy After the Black Death 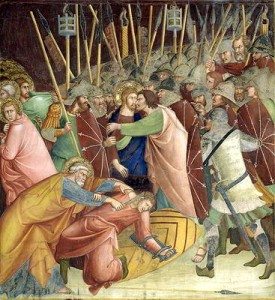 During the thirteenth and fourteenth centuries, Italian painters pursued a common goal. Each new generation explored ways to portray the human being in a more and more true to life style. each generation explored ways to portray the physical space in which the human being dwells in a more and more realistic way. Rooms became deeper, floors and ceilings helped define interior space, space developed a more three-dimensional appearance. Each new generation explored the creation of this rich new world in which human bodies were solid and sometimes beautiful, and rooms and houses and spaces took on a solid deep reality. The result was such that by 1340 in the work of Giotto and his followers, Italian painters had created a style of painting like nothing that ever been seen before: not in Greece, not in Rome. Human beings had grace and substance and stood solid on the ground. The countryside unwound in beautiful colorful vistas. A kind of soft calm settled over the streets and houses of Italy in 1340. Then disaster struck. Just at the moment that Giotto and his colleagues were creating this rich new world, the Black Plague struck. And nothing was the same after. Millard Meiss noticed all this and in a groundbreaking book, he pointed to the drastic change in the painting of Florence and Siena after the Black Death and that will be our subject tonight.

The book noted below is the basis for our lecture tonight. The author of the book, Millard Meiss, a Princeton university art historian, wrote one of the great books of all time in the field of art history when he explored the relationship between the Black Death and painting. It was a brilliant idea and he found evidence to support his theory that the Black Death had changed the whole society and that one change was evident in the painting done in the years immmediately succeeding the Black Death. Used copies are available at Amazon.

About Millard Meiss: Millard Meiss (March 25, 1904 – June 12, 1975) was an American art historian, one of whose specialties was Gothic architecture. A professor at Princeton University, among his many important contributions are Painting in Florence and Siena after the Black Death and French Painting in the Time of Jean de Berry. He organized the first meeting in the United States of the Congress of the International Committee of the History of Art, and was elected the organization’s president. In 1966, he assisted in Florence with restoration efforts following the 1966 Flood of the Arno River, despite being in ill health.

Unfortunately for us, this is such a popular book even many yeara after its initial publication that the price for a new paperback is high. But there are many used copies at good prices. If you pay $10.00 you get a copy described as very good.

Painting in Florence and Siena After the Black Death,