The Black Death was one of the most devastating pandemics in human history, resulting in the deaths of an estimated 75 to 200 million people and peaking in Europe in the years 1346–53. Although there were several competing theories as to the etiology of the Black Death, analysis of DNA from victims in northern and southern Europe published in 2010 and 2011 indicates that the pathogen responsible was the Yersinia pestis bacterium, probably causing several forms of plague.

The Black Death is thought to have originated in the arid plains of Central Asia, where it then travelled along the Silk Road, reaching the Crimea by 1343.] From there, it was most likely carried by Oriental rat fleas living on the black rats that were regular passengers on merchant ships. Spreading throughout the Mediterranean and Europe, the Black Death is estimated to have killed 30–60% of Europe’s total population.  In total, the plague reduced the world population from an estimated 450 million down to 350–375 million in the 14th century. The aftermath of the plague created a series of religious, social, and economic upheavals, which had profound effects on the course of European history. It took 150 years for Europe’s population to recover.[citation needed] The plague recurred occasionally in Europe until the 19th century.  (Wikipedia)

The best recent study of the Black Death is this excellent book of 2005 by John Kelly.

If you would like to read an account of human beings and disease then this small brilliant book from by the greatest living American historian, William McNeill will serve you well. I say the “greatest living…” and of course that is debatable, but for me, I value what William McNeill has done as the highest achievement in history, especially his masterpiece,The Rise of the West. It is still the best one-volume history of Western Civilization. Plagues and Peoples is a very wide rich book. It begins with a short introduction to the anthropological history of humankind and always with an eye to how disease has played its part. The section of the book that will most interest us this week is Chapter Four: The Impact of the Mongol Empire on Shifting Disease Balances, 1200–1500. This chapter is the best analysis of how the Black Death was connected to larger issues of populations and politics. It is worth owning the book if only to go directly to Chapter 4.

No small themes for historian William McNeill: he is a writer of big, sweeping books, from The Rise of the West to The History of the World. Plagues and Peoples considers the influence of infectious diseases on the course of history, and McNeill pays special attention to the Black Death of the 13th and 14th centuries, which killed millions across Europe and Asia. (At one point, writes McNeill, 10,000 people in Constantinople alone were dying each day from the plague.) With the new crop of plagues and epidemics in our own time, McNeill's quiet assertion that "in any effort to understand what lies ahead the role of infectious disease cannot properly be left out of consideration" takes on new significance.

McNeill's highly acclaimed work is a brilliant and challenging account of the effects of disease on human history. His sophisticated analysis and detailed grasp of the subject make this book fascinating reading. By the author of The Rise Of The West. Upon its original publication, Plagues and Peoples was an immediate critical and popular success, offering a radically new interpretation of world history as seen through the extraordinary impact--political, demographic, ecological, and psychological--of disease on cultures. From the conquest of Mexico by smallpox as much as by the Spanish, to the bubonic plague in China, to the typhoid epidemic in Europe, the history of disease is the history of humankind. With the identification of AIDS in the early 1980s, another chapter has been added to this chronicle of events, which William McNeill explores in his new introduction to this updated editon. Thought-provoking, well-researched, and compulsively readable, Plagues and Peoples is that rare book that is as fascinating as it is scholarly, as intriguing as it is enlightening. "A brilliantly conceptualized and challenging achievement" (Kirkus Reviews), it is essential reading, offering a new perspective on human history. 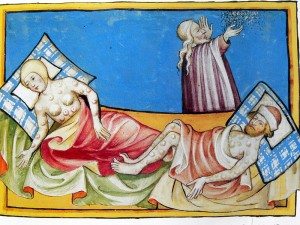