Islam and Christianity in the 14th Century 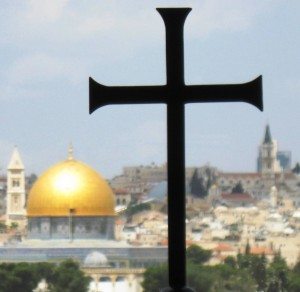 During week 29 we want to look at the changing relationship of Islam and Christianity in the Mediterranean and especially in Italy. The 600 years between the Islamic invasion of Spain and the last Crusade witnessed a change in fortunes for the two sides of the confrontation between Muslims and Christians.

In 711, Cristendom was disorganized, attacked from all sides by various invading peoples, and lacking any central authority. By 1300, Italy was rich and successful. The enemy across the seas was less frightening than in the days when Islamic ships sailed right up the Tiber river to the Vatican. As Europe gained confidence, it also gained intellectual confidence. This new confidence allowed European professors, philosophers, doctors, and and artists to examine with a more open attitude the knowledge held in the Islamic societies.

This is the best one-volume introduction to Islam.

Islam: The Religion and the People,

"For newcomers to the subject, Bernard Lewis is the man." TIME Magazine

“The doyen of Middle Eastern studies."  The New York Times

“No one writes about Muslim history with greater authority, or intelligence, or literary charm.”  British historian Hugh Trevor-Roper.

This is the best one-volume study of Christian-Islam relations in the Middle Ages and it is especially excellent on Spain. Disregard the bizarre user reviews on Amazon. Most of them seem to be motivated by contemporary politcal issues rather than Wheatcroft's excellent history.

Infidels: A History of the Conflict Between Christendom and Islam,

*Starred Review* In the roar of skyscrapers collapsing in New York and in the thunder of fusillades in Afghanistan and Iraq, a leading British historian hears echoes of battles fought centuries ago. This timely chronicle amplifies those echoes to show how much ancient animosities pervade the modern conflict between radical Islamic terrorist Osama bin Laden and America. Impelling the Muslim and Christian combatants who crossed swords at Jerusalem and Granada, at Lepanto, Constantinople, and Missolonghi, these ancient hatreds inspired daring innovations in military weaponry and tactics, as well as astonishing enlargements in both faiths' religious demonology. Wheatcroft recounts the clashes of arms--jihad and crusade--in narrative taut and memorable. With rare sophistication, he also traces the perplexing ways religious orthodoxy now reinforced, now checked the political and economic impulses shaping Europe and the Levant. But readers will praise Wheatcroft most for his acute psychological analysis of how Muslim and Christian leaders alike imbued their followers with hostility toward those who adhered to alien creeds. It is this analysis that lends force to the concluding commentary on how President Bush has unwittingly tapped into a very old reservoir of religious enmity with his absolutist rhetoric calling for a "crusade" against the terrorist evil. As a work that interprets today's headlines within a very long chronology, this book will attract a large audience. Bryce Christensen Copyright © American Library Association. All rights reserved.