Boccaccio, the Decameron, and the Plague 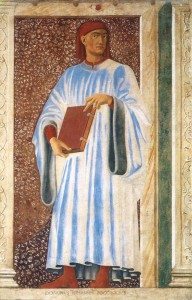 Giovanni Boccaccio was born in 1313, in the small town of Certaldo which is located just south of Florence in the Val d’ Elsa. His father was a merchant-banker and in 1326 the family loved to Naples. IN this huge bustling international city, young Giovanni went to work in his father’s bank to learn banking. But he soon realized he cared nothing about business so convinced his father to allow him to enter the University of Naples to study Law. Giovanni cared only a little more about the Law than he did about banking, but he loved the university and used his six years there to acquire a brilliant education. Naples was much more international than Florence with ties to the Islamic work, to Egypt, to Greece, and the Byzantine empire. And so when Giovanni returned to Florence in 1341, he now possessed a sophisticated education that included knowledge of some Greek, and a knowledge of philosophy, law, and literature. During the next six years, Boccaccio wrote a number of works and attempted to create a career in literature. A professional writer at that time relied on patrons. There was no copyright, no income from one’s printed works. So the professional writer looked for financial support from various sponsors: political, religious, private. Then the event that would change his life and his career and his fame hit all of Italy: The Black Plague. Florence was hit as hard as any large city. And in months, the population of this city of 100,000 fell by half. Maybe more. Boccaccio saw it all up close, because his father was serving his beloved city as Minister of Supply, with all the responsibilities of trying to help the desperate population. He died the next year worn out by his work for his city. Boccaccio launched the book that would make him famous in 1349, as his family tried to recover from the Pest and from the death of the Patriarch of the family. Boccaccio sat down in 1349 and began to write The Decameron. The success of the book was phenominal. It made its author famous overnight. It is still one of the most popular books ever written in Italian.

This is an excellent edition of selected stories from the Decameron as well as important critical articles from experts on Boccaccio and the most important early biography of him.

'The Decameron' is a series of 100 stories, ten stories told each night by ten different people who had left the city for a country sojourn to escape a time of plague. Giovanni Boccaccio, an Italian author known as part of the founding trinity of Italian literature (the others are Dante and Petrarca), was born in 1313, and produced most of his literary works by his mid-30s. The ten characters in 'The Decameron' were all young people, much like Boccaccio, and the passions, interests and issues of his own age is illustrated among these folk -- Boccaccio's possibly-fictitious love, Fiammetta, is similarly one of the characters here. This edition by Norton does not include all 100 stories, but rather 21 selected stories, many of the more popular ones, selected by professors Mark Musa and Peter Bondanella (professors at my university when I was there 20 years ago), who are also known for their editing and translation of works by Dante and Machiavelli. There are selections from each 'day' (set of 10 stories), as well as a few of the extra texts, such as a prologue, introduction, and overall conclusion by Boccaccio. These are edited to fit together, as Boccaccio's tales often would wind from one story to the next, making a selection of disconnected stories difficult in transition without editing. There are also two different kinds of critical analytical materials included in this Norton Critical Edition. The first includes personal correspondence samples, particularly between Boccaccio and Petrarca; these date even after the writing of 'The Decameron', showing the interest and reactions. These materials include other contemporary and closely-following generations' reactions and influences from 'The Decameron'.