The Birth of the Maritime Republics 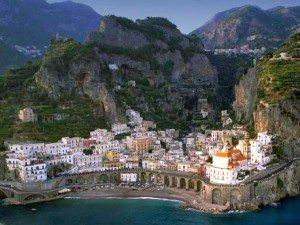 The most dramatic evidence of the rebirth of Italy after the Dark Ages is the sudden appearance of five or six new centers of power and trade in cites on the Italian coasts, both east and west. Cities like Amalfi, Pisa, Genoa, and Ancona (Venice is a different story) suddenly spring into being almost without slow growth or evolution. Some were former small Roman colonies like Pisa, but others are essentially new centers born between 800 and 1000. These cities came to life for one reason above all other reasons: Italian navies took back control of the central Mediterranean from Islamic raiders that had harassed the Italian coasts for 300 years. Now in the eleventh century, Italy took control of its own waters and the first beneficiaries were the very cities that had paid for the navies, manned the ships, fought the battles. What was most important about these new growing cities is that they were democracies; republics; maritime republics. Thus here in these cities by the sea was born a vigorous defense of personal liberty and civic liberty in opposition to the landed barons out in the countryside.