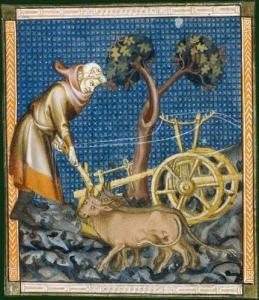 From about 800 AD to 1000 AD, Europe and Italy specifically went through a historic transformation of the way that food was produced. There were technological breakthroughs, social changes, population increases and political repercussions. Much of this transformation was driven by the adoption of the Deep Plough that you see at the right. Sometime in the 800’s the instrument, the Deep Plough, became widely known throughout Europe. It may have been an import from the Slavic regions. We are not sure. But we do know from art and surviving instruments that between 800 and 1000, farmers all over Europe began to understand the advantages of the Deep Plough. The most important advantage was that the Deep Plough could help produce more food, better crops, higher protein diets, and a healthier lifestyle. All of these things meant that the population of Europe and especially Italy, increased steadily from 800 on. By 1300, Florence was a city of 100,000. Venice was bigger. This population increase fed the whole economy. This is our subject tonight. And it leads the way to next week: the great new Maritime cities.

Farms, farmers and the Italian countryside.