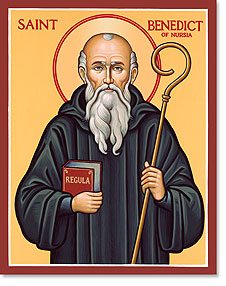 In the seventy-plus years between the last Roman Emperor (476 AD) and the death of Benedict (547 AD), Western Europe created a whole new version of Christianity: monastic Christianity. Born in the years of massive social unrest and political collapse, the new monastic life as it came to be lived in Italy under the leadership of Benedict, appealed to both men and women, rich and poor, young and old. It offered people the opportunity to withdraw from the confusion and to move into a safe space and to join a community of like-minded individuals who welcomed the simplicity of monastic life. The single most important individual in the creation of this new way of life was Benedict of Nursia.

Here is a summary of Benedict from Wikipedia:

Benedict of Nursia (Italian: San Benedetto da Norcia) (480 to 547) is a Christian saint, honoured by the Catholic Church and the Anglican Church[1] as the patron saint of Europe and students. Benedict founded twelve communities for monks at Subiaco, Italy (about 40 miles (64 km) to the east of Rome), before moving to Monte Cassino in the mountains of southern Italy. The Catholic Order of St Benedict and the Anglican Order of St Benedict are of later origin and, moreover, not an “order” as commonly understood but merely a confederation of autonomous congregations. Benedict’s main achievement is his “Rule of Saint Benedict”, containing precepts for his monks. It is heavily influenced by the writings of John Cassian, and shows strong affinity with the Rule of the Master. But it also has a unique spirit of balance, moderation and reasonableness, and this persuaded most religious communities founded throughout the Middle Ages to adopt it. As a result, his Rule became one of the most influential religious rules in Western Christendom. For this reason, Benedict is often called the founder of western monasticism.

This is one of the most influential books ever written. For over one thousand years, millions of people looked to this simple guide for a rule as to how to live each day, each week, each month. And here we have it in this nice little inexpensive paperback edition.

Monte Cassino is a rocky hill about 130 kilometres (81 mi) southeast of Rome, Italy, 2 kilometres (1.2 mi) to the west of the town of Cassino (the Roman Casinum having been on the hill) and 520 m (1,706.04 ft) altitude.  St. Benedict of Nursia established his first monastery, the source of the Benedictine Order, here around 529. It was the site of the Battle of Monte Cassino in 1944, where the building was destroyed by Allied bombing and rebuilt after the war. The site has been visited many times by the Popes and other senior clergy, including Pope Benedict XVI in May 2009. 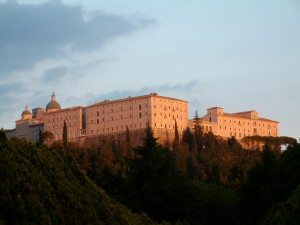