Upon the death of Henry VIII he left three possible heirs: his son Edward VI who ascended to the throne without challenge; his eldest daughter Mary who followed her half-brother to the throne; and another daughter born to Anne Boleyn, Elizabeth. All three children had grown up under different mothers, different tutors, different religious advisors and in their diversity they reflected the possible directions of the English public in religious affairs. Although Edward VI had a short life, his reign was extremely important since he was a true Protestant, he knew what the Lutheran reformation meant, and he agreed with it.  So for a few years England became part of the larger Protestant movement. One very important person in his life was his dear friend Lady Jane Grey.  Her tragic story will also be part of this evening.

There is a very good new biography of Edward VI: The Boy King Edward VI and the Protestant Reformation, Diarmaid Macculloch

He holds a golden rattle that resembles a sceptre; and the Latin inscription urges him to equal or surpass his father. 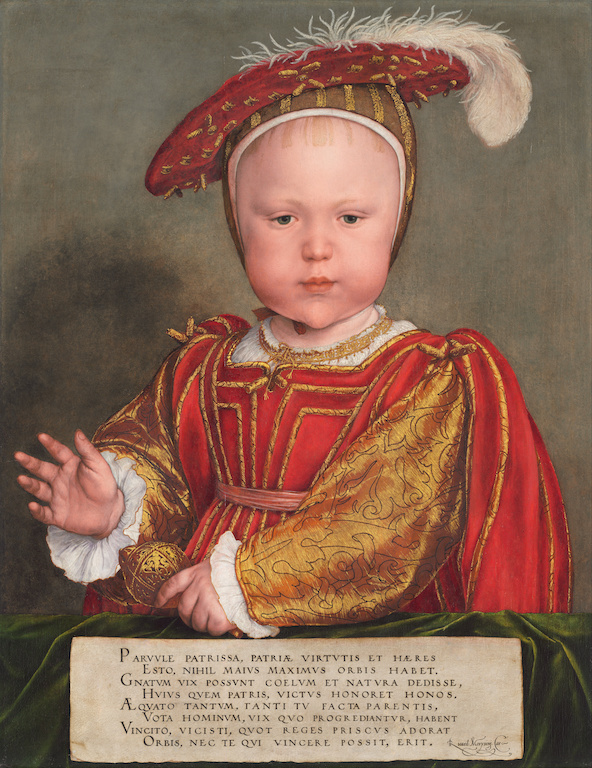 The ten weeks of the Winter Quarter of "History of England" are dominated by the Tudor family. From the moment that Henry Tudor (1457-1509) triumphed on the battlefield at Bosworth Field on August 22, 1485, the story of early modern England became fatefully married to the story of the Tudors: Henry VIII, Edward VI, Mary I, and Elizabeth I.