Somewhere in the early years of the second millenium BC (1500-2000 BC), a whole new civilization was born in various cities of mainland Greece. The one we know best is Mycenae, the city of Agamemnon and his family. Agamemnon was the son of King Atreus and Queen Aerope of Mycenae, the brother of Menelaus, the husband of Clytemnestra and the father of Iphigenia, Orestes and Chrysothemis. When Helen, the wife of Menelaus, was taken to Troy by Paris, Agamemnon commanded the united Greek armed forces in the ensuing Trojan War. All around Mycenae and the Ancient Greek heroes another culture on the island of Crete flourished that was older than Mycenae. Tonight we want to visit that culture, the world of King Minos and his daughter Ariadne, and to see how that culture moved onto the mainland and influenced the new world of Agamemnon. Finally we will visit Pylos, the city of Nestor and the recently discovered Griffin Warrior's Tomb (see below). 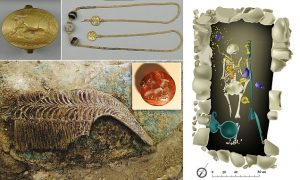 The Riddle of the Labyrinth: The Quest to Crack an Ancient Code,