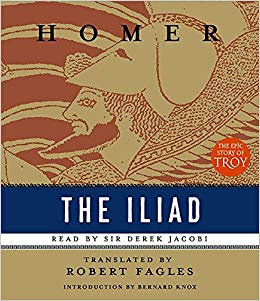 BOOK I (Rage of Achilles),

The Trojans
Priam: elderly king of Troy.
Hecuba: wife of Priam.
Hector: leader of the Trojan forces, favorite son of Priam and Hecuba.
Paris (Alexander): brother of Hector, abductor of Helen.
Sarpedon: king of Lycia, son of Zeus and Laodameia.
Aeneas: son of Anchises and Aphrodite.

Gods Allied with the Trojans
Aphrodite: daughter of Zeus and Dione, goddess of sexual desire, protectress of Helen [Cyprian].
Apollo: son of Zeus and Leto; brother of Artemis; god of culture, poetry, music, healing, archery.
Ares: son of Zeus and Hera, god of war and violence.

Other Gods
Zeus: ruler of the gods; god of sky, weather, the thunderbolt.
Hades: ruler of the nether world, brother of Zeus [Hades is used to signify the god's realm (i.e. hell) as well as the god himself].
Hephaestus: son of Hera, lame god of blacksmiths.
Iris: messenger of the gods, goddess of the rainbow.
Hermes: another messenger-god; patron of travelers, thieves, and charlatans; conductor of dead souls on journey to Hades.

Classes will not be held the week of November 22-26, Thanksgiving vacation.

Students have stated they prefer having the week off; many are traveling for the holidays.