The Bronze Age collapse involved a dark-age transition period in the Near East, Asia Minor, Aegean region, North Africa, Caucasus, Balkans and the Eastern Mediterranean from the Late Bronze Age to the Early Iron Age, a transition which historians believe was violent, sudden, and culturally disruptive. The palace economy of the Aegean region and Anatolia that characterised the Late Bronze Age disintegrated, transforming into the small isolated village cultures of the Greek Dark Ages. The half-century between c. 1200 and 1150 BC saw the cultural collapse of the Mycenaean kingdoms, of the Kassite dynasty of Babylonia, of the Hittite Empire in Anatolia and the Levant, and of the Egyptian Empire; and a period of chaos in Ancient Israel. The deterioration of these governments interrupted trade routes and severely reduced literacy in much of the known world. In the first phase of this period, almost every city between Pylos and Gaza was violently destroyed, and many abandoned, including Hattusa, Mycenae, and Ugarit. According to Robert Drews: "Within a period of forty to fifty years at the end of the thirteenth and the beginning of the twelfth century almost every significant city in the eastern Mediterranean world was destroyed, many of them never to be occupied again." This was the period of the Trojan War and Moses leading his people out of Egypt. This may also be the time the Etruscans left Anatolia and migrated to Italy (Herodotus). (Wikipedia) 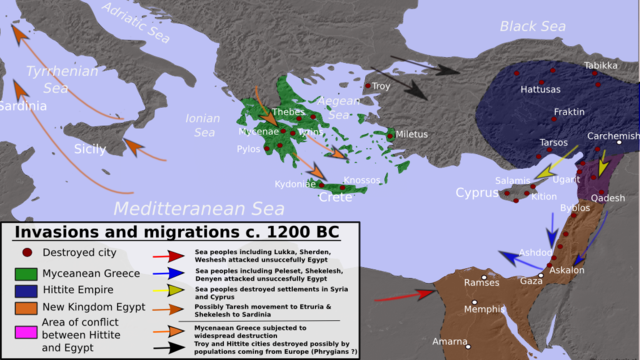 The End of the Bronze Age,