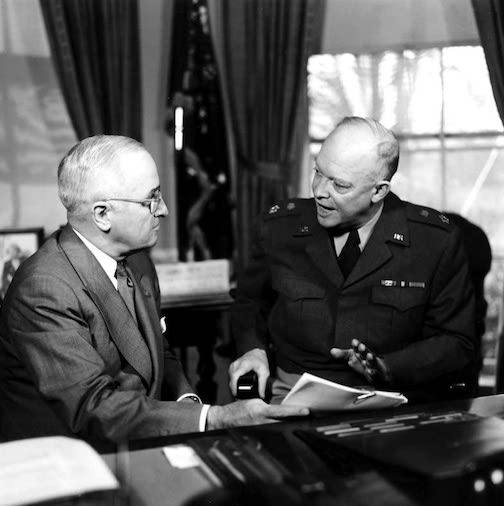 After FDR, a scion of America’s Eastern, Harvard-educated elite, came two presidents from the American heartland: Harry Truman and Dwight Eisenhower. Harry Truman, born in 1884, was the living bridge between the nineteenth and twentieth centuries. Although he has a university in his home state of Missouri named after him, he was the only modern president who never spent a single day in college. He left office with an approval rating of 22 percent, yet he is now recognized as one of the top-tier presidents, his reputation in 2021 standing higher than ever. Was his far more popular successor, Dwight Eisenhower, as great a president as he was a general? Derided by his detractors as a somnambulant mediocrity, he was in fact both a shrewd politician and a decisive leader in a crucial period of the Cold War, which he came close to ending.

(FOR ONLINE, ONLY ONE TUITION PER HOUSEHOLD IS NECESSARY. PHONE RESERVATIONS ARE REQUIRED FOR VERY LIMITED
IN-PERSON ATTENDANCE AT $315 PER PERSON

July 8 ~ Passing the Torch: From Roosevelt to Truman

August 5 ~ Baptism by Fire: From North Africa to Sicily

August 12 ~ Supreme Commander: D-Day and the Liberation of France