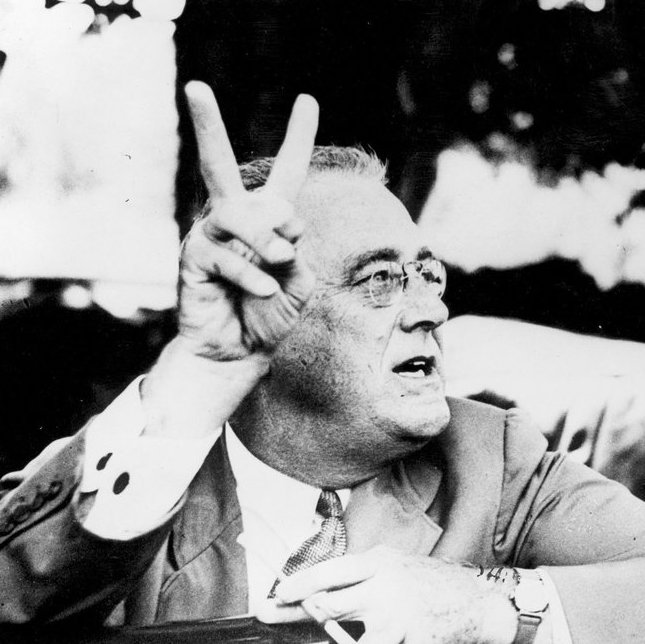 Few Americans today have memories of the Roosevelt presidency: any who was 15 in 1945 would be 90 today.  Yet FDR remains the outstanding president of the modern era, and his presidency is still the one against which all subsequent presidencies have been measured.  (On most lists of the greatest presidents in American history, he is number 3, with only Lincoln and Washington above him.)  How do historians today assess his leadership during the two great crises of the twentieth century, the Great Depression and the Second World War?  By what alchemy did he convert his personal history of privilege and trauma into a leadership style and a worldview that served him and his country well for more than a dozen crucial years in modern American history?  And how did American society and culture change over the course of his presidency?

As the 1932 Presidential contest approached, the great political commentator Walter Lippmann wrote: “Franklin D. Roosevelt is no crusader.  He is no tribune of the people.  He is no enemy of entrenched privilege.  He is a pleasant man who, without any important qualifications for the office, would very much like to be President.”  That judgment now seems to be something of an underestimate.  But who was he: what were the sources of his personality, his worldview, his political acumen?  And how did he defeat Herbert Hoover in one of American’s history’s most consequential landslide elections?

Every president now measures the first one hundred days of his administration against the blizzard of legislation FDR enacted during the first three months of his presidency.  What were those measures?  How did FDR and manage to persuade Congress to create so many new agencies, with enormous executive powers, in such a short period of time?  What were the underlying principles informing the initial burst of legislation that created the blueprint for FDR’s New Deal?  And what did all of those new Federal agencies accomplish?

JUL 23 ~ LET’S FACE THE MUSIC AND DANCE: ENTERTAINING AMERICA DURING THE 1930S

The FDR era was a golden age in the history of American popular entertainment and culture.  Why was the decade of the 1930s one of the most successful in the history of Hollywood movies?  And why was so much of the American songbook, culminating in the most popular song of them all (Over the Rainbow), created during this decade?  Who were the biggest stars, and why?  And in an era when newspapers were still the dominant medium, why were the sports pages so important for millions of Americans?

If he were remembered for nothing else, FDR would still be considered one of our greatest presidents for having proposed and pushed through the legislation that gave Americans Social Security.  But much of the legacy of the New Deal remains controversial.  To what extent was FDR’s stewardship of the economy successful?  Did he save American capitalism, or did he actually prolong a recovery that would have occurred sooner without massive government intervention?  What were the successes and failures of the FDR’s first two terms?

How did the war begin?  What went wrong with America’s relationship with Japan?  How did Churchill and Roosevelt forge a partnership, more than a year before the attack on Pearl Harbor, that would eventually win the war?  How did the Allies reverse the momentum of the war in the Pacific, and drive the Nazis out of Africa?

Hitler hated committees.  In contrast, Roosevelt, as the leader of a democratic country and a great alliance, understood the importance of cooperation, the delegation of authority, and effective management.  General George Marshal was the organizer of victory:

The United States “mobilized 14.9 million Americans, more than Germany’s 12.9 million and twice Japan’s 7.4 million.  She bore the lion’s share of the war in the Pacific and provided two-thirds of the forces at Overlord and the subsequent fighting in the west.  The Eighth Army Air Force bombed Germany relentlessly, while the US provide many of the boots, trucks and armaments with which the Russians held back and eventually prevailed over the Germans” (Andrew Roberts).

Why was American popular culture during the 1940s so different from that of the 1930s?  To take the example of the movies, why screwball comedy during the Depression, and film noir during (and after) the Second World War?  How did Broadway musicals change during this period, starting with Rodgers and Hammerstein’s classic Oklahoma! In 1943?  And why were Bob Hope and Bing Crosby the most popular entertainers during the Second World War?

How did General Eisenhower succeed as the leader of the effort to defeat Hitler in Europe?  How did Roosevelt miscalculate at Yalta?  How did his successor, Harry Truman, perform at the last of the wartime conferences, Potsdam?  How did the war end?  How did the atomic age begin?  How did America’s leaders and planners envision the architecture of the postwar settlement?  And how had America itself changed during the dozen years between the election of FDR in 1932 and his death in 1945?