The Art of Northern Europe 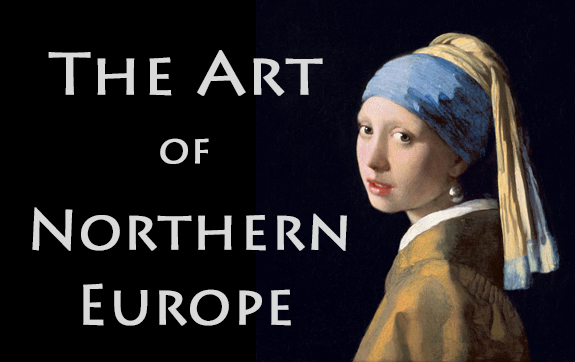 (a ten-week class ~ see syllabus below)

During the four hundred years from 1400 to 1700, the art of the Low Countries exploded with a creative energy and power rarely seen in any culture, let alone one so geographically small.  The Netherlands and Flanders were each about one-twentieth the size of France. The Van Eycks led the way with the innovation of oil painting that would soon conquer the whole artistic world. Their followers such as Roger Van Der Weyden and others advanced the new technique with such power that even the Italians marveled at the new style. Italian diplomats and bankers bought the Flemish artists and took them to Florence, Venice, and Rome. Tourists visiting Florence today still find Roger Van Der Weyden’s paintings sitting across from the Botticellis in the Uffizi. This summer, we will spend ten weeks enjoying the beauty and uniqueness of the art of the great cities of the Low Countries: Amsterdam, Bruges, Ghent, Delft, Antwerp, Brussels and Liege.

Van Eyck is the beginning of the Flemish “Renaissance,” the moment when the art of the north rivals the art of the great cities of Italy. It all begins with Van Eyck.  He had immense financial and social success, and his income was unrivaled by any other contemporary artist.

Van Der Weyden was just a bit younger than Van Eyck and therefore had the achievement of Van Eyck before him to teach and to inspire as he began his career.  His work challenged the success of Van Eyck, and was admired and purchased by all the great courts of Europe.

Bosch was born into a family of painters and spent most of his life working in the town of Hertogenbosch in the duchy of Brabant in the southern part of present-day Netherlands. Bosch created some of the best-known and most frightening images to come out of European art.

David painted images as soothing as Bosch’s are disturbing. His visions of the Nativity and other stories of the Holy Family are some of the most beautiful in the world, with his rich color creating an unforgettable aura of peace and tranquility.

Grünewald was a German Renaissance oil painter of primarily religious subjects. Only ten paintings—several consisting of many panels—and thirty-five drawings survive, all religious, although many others were lost at sea in the Baltic on their way to Sweden as war booty.

Breughel had only forty-four years to create a unique vision of the world that is both beautiful and odd. His magnificent landscapes full of misbehaving peasants have been hugely popular for five hundred years. He is perhaps the first artist to paint landscapes for their own sake rather than as a background for human action.

Rubens was the most successful Flemish painter of the seventeenth century. His career took him into the courts of Europe where he became an intimate friend to kings and dukes, who bought his work and employed him in important diplomatic embassies. Rubens became immensely rich and built a magnificent home to house his art.

If Rubens was artist to the kings Jan Steen was artist for the middle class. His paintings of Dutch domestic scenes are so entertaining that they fostered a common Dutch saying, “a Jan Steen household” (“een huishouden van Jan Steen”) meaning a wild family scene with everything out of control.

Vermeer had a very short life and completed an unusually small number of paintings in his lifetime. His reputation was in total eclipse for almost two hundred years, but in the 21st century he is among the most loved and highly valued painters in the world.

Vermeer left thirty paintings. Rembrandt gave us over 600 paintings, 400 etchings, and over 2,000 drawings, a spectacular achievement by one of the world’s favorite artists.  The two Dutch contemporaries provide us with a vision into the incredibly rich society of seventeenth-century Holland.

Class begins at 7:00PM, and is always preceded
by a fun gathering hour of wine, goodies, and dessert.

William H. Fredlund, the Director of the Institute, obtained his B.A. and M.A. from UCLA, where he specialized in European history and art history. He studied in Italy on a Fulbright Fellowship and completed a double Ph.D. in history and humanities at Stanford, specializing in Renaissance Italy. Dr. Fredlund has taught for UCLA, the University of Florence, Stanford, and UCSC Extension.