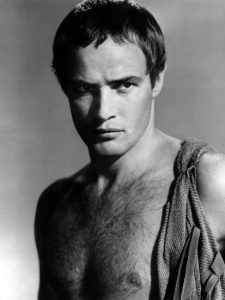 Above you see one of the many sculpted heads of Julius Caesar that have survived from the first century BC. Next to him, you see the best modern version of Caesar, Marlon Brando. Julius Caesar was born in 100 BC; he died on March 15, 44 BC. Caesar may be the most controversial figure in all of European history. For two thousand years, his life and death have marked the end of the Roman Republic and the onset of the Roman Empire. The fate of the Republic has been the most important issue of debate in various periods of European history, as well as in our own US history. In every instance of political crisis, when Western democracies debate the true nature of their political health, the conversation has gone back to Julius Caesar: Was he a tyrant or was he a failed savior of the Roman Republic? For example, in 1215 when they signed the Magna Carta, during the crises of the Tudor century, and also in the Stuart era, men looked to Caesar. In 60 BC, and in 50 BC, that question was the core of the debate among Romans. And then, in 44 BC, the debate was ended with a sword. For our study of the Republic, we must evaluate Julius Caesar, his life, and his career; and we must also try to decide what happened. Was he the final destructive, last chapter of the 500-year old Roman Republic? His life and his dialog with Cicero are the most important sources of information on the issue.

The Conquest of Gaul,

Goldsworthy presents a wonderful exploration of Caesar's life, including his military and political conquests, revealing his personality in a sympathetic telling. Many, many books have been written about Caesar and his time. This one is very accessible and worthwhile, and, I think, the best.

Caesar: Life of a Colossus,

Classes will not be held the week of November 25 to 29, Thanksgiving vacation.

Students have stated they prefer having the week off; many are traveling for the holidays.

Outline of the Acts of the Apostles