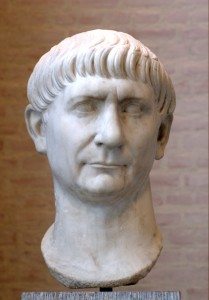 Trajan was Roman Emperor from 98 AD until his death in 117 AD. Officially declared by the senate as "optimus princeps" ("the best ruler"), Trajan is remembered as a successful soldier-emperor who presided over the greatest military expansion in Roman history, leading the empire to attain its maximum territorial extent by the time of his death. He is also known for his philanthropic rule, overseeing extensive public building programs and implementing social welfare policies, which earned him his enduring reputation as the second of the Five Good Emperors who presided over an era of peace and prosperity in the Mediterranean world. Born into a non-patrician family of Italian origin in the city of Italica in the province of Hispania Baetica (Spain), Trajan rose to prominence during the reign of emperor Domitian. Serving as a legatus legionis in Hispania Tarraconensis, in 89 Trajan supported Domitian against a revolt on the Rhine led by Antonius Saturninus. In September 96, Domitian was succeeded by Marcus Cocceius Nerva, an old and childless senator who proved to be unpopular with the army. After a brief and tumultuous year in power, a revolt by members of the Praetorian Guard compelled him to adopt the more popular Trajan as his heir and successor. Nerva died on 27 January 98, and was succeeded by his adopted son without incident.

Trajan's Forum, Trajan's Column, Trajan's Market and the Neighborhood of the Quirinale Hill. The Quirinale Palace, residence of the President of Italy. 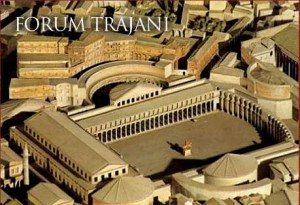