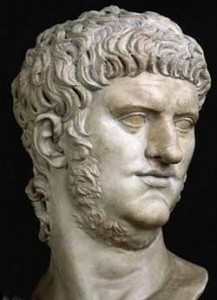 Nero was Roman Emperor from 54 to 68, and the last in the Julio-Claudian dynasty. Nero was adopted by his great-uncle Claudius to become his heir and successor, and succeeded to the throne in 54 following Claudius' death. During his reign, Nero focused much of his attention on diplomacy, trade, and enhancing the cultural life of the Empire. He ordered theaters built and promoted athletic games. During his reign, the redoubtable general Corbulo conducted a successful war and negotiated peace with the Parthian Empire. His general Suetonius Paulinus crushed a revolt in Britain. Nero annexed the Bosporan Kingdom to the Empire and began the First Romanâ€“Jewish War. In 64 AD, most of Rome was destroyed in the Great Fire of Rome, which many Romans believed Nero himself had started in order to clear land for his planned palatial complex, the Domus Aurea. In 68, the rebellion of Vindex in Gaul and later the acclamation of Galba in Hispania drove Nero from the throne. Facing assassination, he committed suicide on 9 June 68 (the first Roman emperor to do so) His death ended the Julio-Claudian Dynasty, sparking a brief period of civil wars known as the Year of the Four Emperors. Nero's rule is often associated with tyranny and extravagance. He is known for many executions, including that of his mother, and the probable murder by poison of his stepbrother Britannicus. He is infamously known as the Emperor who "fiddled while Rome burned" and as an early persecutor of Christians. He was known for having captured Christians to burn them in his garden at night for a source of light. This view is based on the writings of Tacitus, Suetonius, and Cassius Dio, the main surviving sources for Nero's reign. Few surviving sources paint Nero in a favorable light. Some sources, though, including some mentioned above, portray him as an emperor who was popular with the common Roman people, especially in the East.  (Wikipedia.)

Lucius Annaeus Seneca (often known simply as Seneca; c. 4 BC - AD 65) was a Roman Stoic philosopher, statesman, dramatist, and in one work humorist, of the Silver Age of Latin literature. He was tutor and later advisor to emperor Nero. While he was forced to commit suicide for alleged complicity in the Pisonian conspiracy to assassinate Nero, he may have been innocent. His father was Seneca the Elder and his elder brother was Lucius Junius Gallio Annaeanus, called Gallio in the Bible. Seneca was the exact contemporary of the Christian preacher-writer Paul.(Wikipedia.)