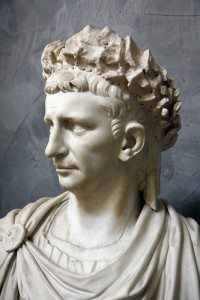 Claudius was Roman emperor from 41 to 54. A member of the Julio-Claudian dynasty, he was the son of Drusus and Antonia Minor. He was born at Lugdunum (Lyons) in Gaul and was the first Roman Emperor to be born outside Italy. Because he was afflicted with a limp and slight deafness due to sickness at a young age, his family ostracized him and excluded him from public office until his consulship, shared with his nephew Caligula in 37. Claudius' infirmity probably saved him from the fate of many other nobles during the purges of Tiberius and Caligula's reigns; potential enemies did not see him as a serious threat. His survival led to his being declared Emperor by the Praetorian Guard after Caligula's assassination, at which point he was the last man of his family. Claudius was also mentioned by Luke the Evangelist in Acts 11:28 and Acts 18:2 of the New Testament. Despite his lack of experience, Claudius proved to be an able and efficient administrator. (Wikipedia.)

You can start reading Seneca this week.