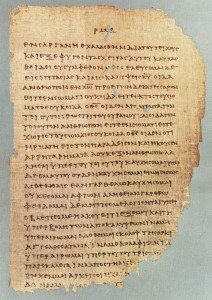 At the right you see a papyrus folio copy of Paul's Second Letter to the Corinthians written in Greek.  Paul's travels and letters date to the 50's and are the earliest documents we have from early Christianity.  The Pauline letters and Luke's book, The Acts of the Apostles, give us a good view of what was happening to the growing Christian community.  By the 60's, thirty years after the Crucifixion, Christians had come to Rome and were a growing community.  This was all undergound and illegal, and yet the the Christians flourished anyway.  We assume that both Peter and Paul were there in the 60's and that they both died in the Neronian persecution of 64-65 AD.   Peter was buried outside of the city in the northwest country across the Tiber river, a place now marked with the church of St. Peter's Basilica, and Paul was buried just outside the southeastern walls, a place now marked by the Basilica of St Paul's Outside the Walls.   These locations were preserved in the shared memory of the Christian community through the centuries so that when Christianity was made legal in 313, Christians could build churches on these  two hallowed locations. The success of the Christians in Rome during the next century suggests that the Roman state was losing its faith in its own Classical gods and also in the Roman state itself.  This week we will examine this Christian success and what it means for our understanding of Imperial Rome.

The Acts of the Apostles

I like the New Jerusalem Bible version the best.

We have copies in the Institute library.

Here are two wonderful novels that tell about the world of early Christianity.  Both deal with Luke and the Taylor Caldwell novel, Dear and Glorious Physician, is the best possible way to come to know the whole world of Luke and Paul, other than reading Luke and Acts.  You will love these books if you are a fan of historical fiction.

Dear and Glorious Physician, A Novel about Saint Luke,