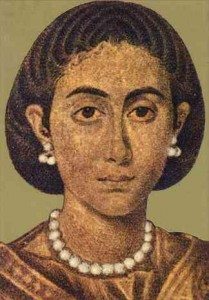 Aelia Galla Placidia (392 to November 27, 450), was the daughter of the Roman Emperor Theodosius I, and a major force in Roman politics for a half century. She was married to Ataulf, King of the Goths, in an attempt by the Roman government to buy peace for Rome from the Barbarians. When Ataulf died in 415, she was stranded within the hostile Gothic community and almost killed. Upon her return to Roman territory she was married to Constantius III and became Empress from 417 until Constantius’ death in 422. Upon the death of her husband, she became the Regent for her young son Emperor Valentinian III from 423 until his majority in 437. But even after he officially was crowned Emperor, his mother was the most important influence in the government of Valentinian. The story of her life in Rome and Milan and in the south of France is a great history of the relationship between the Romans and the Barbarian peoples during the last years of the fourth century and the early years of the fifth century.

Here below is a photo of the Mausoleum built in Ravenna for her tomb. 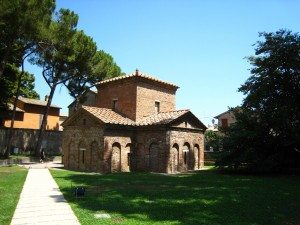