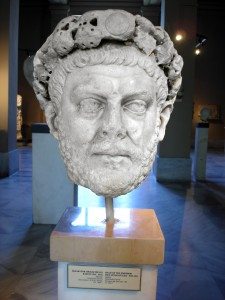 Diocletian was Roman emperor from 284 to 305. Born to a family of low status in the Roman province of Dalmatia, Diocletian rose through the ranks of the military to become cavalry commander to the Emperor Carus. After the deaths of Carus and his son Numerian on campaign in Persia, Diocletian was proclaimed emperor. The title was also claimed by Carus' other surviving son, Carinus, but Diocletian defeated him in the Battle of the Margus. Diocletian's reign stabilized the empire and marks the end of the Crisis of the Third Century. He appointed fellow officer Maximian as augustus, co-emperor, in 285. Diocletian delegated further on 1 March 293, appointing Galerius and Constantius as caesars, junior co-emperors. Under this 'tetrarchy', or "rule of four", each emperor would rule over a quarter-division of the empire. Diocletian secured the empire's borders and purged it of all threats to his power. He defeated the Sarmatians and Carpi during several campaigns between 285 and 299, the Alamanni in 288, and usurpers in Egypt between 297 and 298. Galerius, aided by Diocletian, campaigned successfully against Sassanid Persia, the empire's traditional enemy. In 299 he sacked their capital, Ctesiphon. Diocletian led the subsequent negotiations and achieved a lasting and favorable peace. (Wikipedia.)

Eusebius (260 - 340 AD) is the most important historian of the early church whose work survives. His history from the beginning of Christianity with Jesus Christ in Bk I, goes forward to our period in the last chapters. We are most interested in those last chapters on the age of Diocletian and Constantine. You may want to start out reading his Book I and then skip forward to the later chapters on Diocletian and Constantine. For this first week, Book 7 would be a good introduction on the spreading heresies. Next week there are Books 8 and 9 on Diocletian. And the following week Book 10 on the triumph of Constantine.

The History of the Church from Christ to Constantine,

Diocletian's Palace at Split, Croatia. Diocletian's Palace is a building in Split, Croatia, that was built by the Roman emperor Diocletian at the turn of the fourth century AD. Diocletian built the massive palace in preparation for his retirement on 1 May 305 AD. It lies in a bay on the south side of a short peninsula running out from the Dalmatian coast, four miles from Salona, the capital of the Roman province of Dalmatia. The terrain slopes gently seaward with low limestone ridges running east to west with marl in the clefts between them. 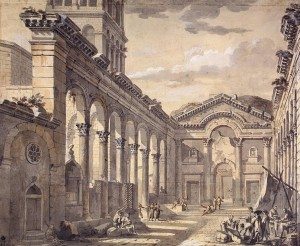