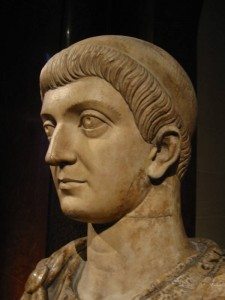 Constantine was Roman Emperor from 306 to 337. Constantine was the son of Flavius Valerius Constantius, a Roman army officer, and his consort Helena. His father became Caesar, the deputy emperor in the west in 293. Constantine was sent east, where he rose through the ranks to become a military tribune under the emperors Diocletian and Galerius. In 305, Constantius was raised to the rank of Augustus, senior western emperor, and Constantine was recalled west to campaign under his father in Britannia. Acclaimed as emperor by the army after his father's death in 306, Constantine emerged victorious in a series of civil wars against the emperors Maxentius and Licinius to become sole ruler of both west and east by 324. As emperor, Constantine enacted many administrative, financial, social, and military reforms to strengthen the empire. The government was restructured and civil and military authority separated. A new gold coin, the solidus, was introduced to combat inflation. It would become the standard for Byzantine and European currencies for more than a thousand years. The first Roman emperor to convert to Christianity, Constantine played an influential role in the proclamation of the Edict of Milan, which decreed religious tolerance throughout the empire. He called the First Council of Nicaea in 325, at which the Nicene Creed was professed by Christians. In military matters, the Roman army was reorganized to consist of mobile field units and garrison soldiers capable of countering internal threats and barbarian invasions. Constantine pursued successful campaigns against the tribes on the Roman frontiers, ”the Franks, the Alamanni, the Goths, and the Sarmatiansâ, even resettling territories abandoned by his predecessors during the turmoil of the previous century. (The above from Wikipedia.)

Eusebius (260 - 340 AD) is the most important historian of the early church whose work survives. His history from the beginning of Christianity with Jesus Christ in Bk I, goes forward to our period in the last chapters. We are most interested in those last chapters on the age of Diocletian and Constantine. This week: Book 10 on the triumph of Constantine.

The History of the Church from Christ to Constantine,

"David Potter's Constantine the Emperor is a fresh look by a veteran scholar at one of the most pivotal reigns in Western history. Almost all studies of this emperor take his conversion to Christianity as their starting point. Potter broadens the focus to show a shrewd field commander who can diagnose and exploit his opponents' weaknesses and an able ruler with a deeply held belief that his 'job' committed him to protecting the weak and ensuring fairness for all his subjects." --Harold Drake, University of California, Santa Barbara

"Crisp in its prose and comprehensive in its coverage, Constantine the Emperor grounds its much mythologized subject in the solid realities of imperial governance." --Noel Lenski, University of Colorado

"This is a penetrating and original analysis, closely based on contemporary evidence, of the step-by-step evolution of Constantine's role as Emperor, and of his conception of that role. Within that wider framework, the nature of Constantine's commitment to Christianity, and of his self-representation as a Christian, is carefully re-evaluated." --Sir Fergus Millar, University of Oxford

The World of Late Antiquity,

This remarkable study in social and cultural change explains how and why the Late Antique world, between ca. 150 and ca. 750 A.D., came to differ from "Classical civilization." These centuries, as the author demonstrates, were the era in which the most deeply rooted of ancient institutions disappeared for all time. By 476 the Roman empire had vanished from western Europe; by 655 the Persian empire had vanished from the Near East. Mr. Brown, Professor of History at Princeton University, examines these changes and men's reactions to them, but his account shows that the period was also one of outstanding new beginnings and defines the far-reaching impact both of Christianity on Europe and of Islam on the Near East. The result is a lucid answer to a crucial question in world history; how the exceptionally homogeneous Mediterranean world of ca. 200 A.D. became divided into the three mutually estranged societies of the Middle Ages: Catholic Western Europe, Byzantium, and Islam. We still live with the results of these contrasts.

The life and work of Empress Helen: Bethlehem, Jerusalem, Rome. 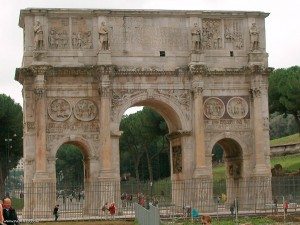