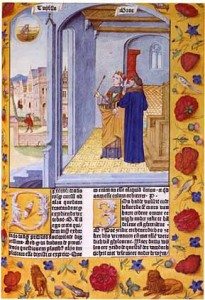 At the right you see a fifteenth-century printed edition of Boethius' work The Consolation of Philosophy, printed in Ghent in 1485, with this beautiful hand painted rendition of Boethius with Lady Philosophy. This work was the most influential work of philosophy of the whole Late Antiquity period. Boethius was influential as the "Last Roman" or the "Last Classical Philosopher" before the onset of the Dark Ages. Boethius was the last of the bilingual Romans who knew all of the ancient Greek philosophy of Plato and Aristotle and also knew the whole of the Latin philosophical tradition. His greatest service to this tradition was to begin to translate all of Plato and Aristotle into Latin. This project came at a critical moment. The documents of the Greek philosophical tradition were all still available and therefore a scholar like Boethius could still conceivably complete this project if he had the time to do it.

Unfortunately, Boethius' time was short. In 525, he was executed by Theodoric in the mistaken belief that Boethius was plotting against him with the Byzantine emperor. This plot was a fiction and Theodoric lived to regret his stupid action. But for the history of philosophy the early death of Boethius was a tragedy that left the whole of the Medieval period with a truncated idea of what the Greeks had thought about things. It favored Aristotle since it was the work of Aristotle that Boethius managed to translate, and it neglected Plato because most of the Platonic works were not translated by Boethius. They were not translated into Latin until the Renaissance. Boethius is an extraordinary presence in the Middle Ages. Everyone with any education read and treasured The Consolation of Philosophy.

Here is more about Boethius from Wikipedia:

Anicius Manlius Severinus Boethius, commonly called Boethius (c. 480-524 or 525 AD), was a philosopher of the early 6th century. He was born in Rome to the ancient and prominent Anicia family, which included emperors Petronius Maximus and Olybrius and many consuls. His father, Flavius Manlius Boethius, was consul in 487 after Odoacer deposed the last Western Roman Emperor. Boethius himself entered public life at a young age and was already a senator by the age of 25. He was consul in 510 in the kingdom of the Ostrogoths. In 522 he saw his two sons become consuls. Boethius was imprisoned and eventually executed by King Theodoric the Great, who suspected him of conspiring with the Eastern Roman Empire. While jailed, Boethius composed his Consolation of Philosophy, a philosophical treatise on fortune, death, and other issues. The Consolation became one of the most popular and influential works of the Middle Ages.

Reading Boethius. We will read the whole of The Consolation of Philosophy. It is only about 100 pages and a pleasure to read. Remember this was written while Boethius was in prison awaiting his fate. He had to consider that this might be his last work and therefore he examined his life and what was worth doing and what was worth learning. Therefore it is much more than just a reflection on classical learning and more than that, it is a reflection on the good life and why we are here.

The Consolation of Philosophy,

BELOW: Boethius imprisoned, discussing philosophy, as seen in this manuscript illumination by Gregorius of Genoa in 1385. 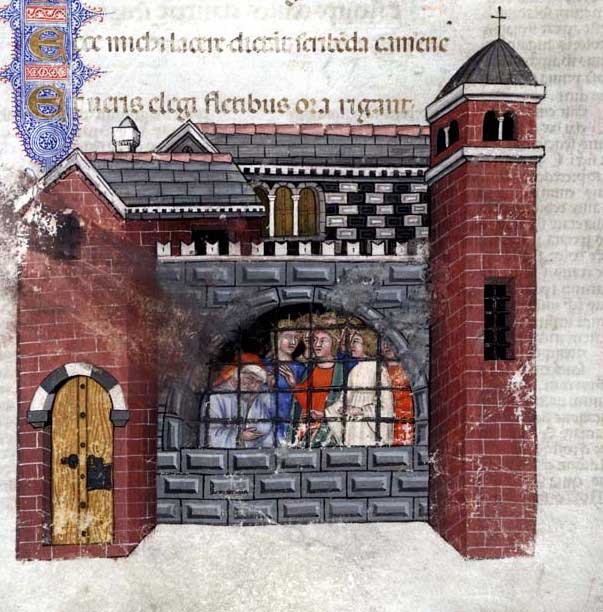