The Renaissance in Florence

In 1390, Manuel Chrysoloras (1355-1415) came to Venice on a diplomatic errand as the representative of the Byzantine emperor in Constantinople. While visiting Venice he met a number of Florentines and one, Giacomo da Scarperia,  followed him home to Constantinople to study Greek. Other Florentines heard about Chrysoloras and therefore in 1396, the Florentine Chancellor Coluccio Salutati invited Chrysoloras to come to Florence as a professor of Greek. Chrysoloras would teach the ancient language to whomever might want to attend the classes. This event—a formal program of Europeans studying Greek—is as useful a mark for the beginning of the Renaissance as any. With the arrival of Chrysoloras in Florence, almost a thousand years of Western European ignorance of Greek came to an end. And with this new field of study came new books, new publications, new ideas. The study of Greek sparked new interest in mathematics, astronomy, geography, geometry, optics, and cartography. By the 1420’s Florence found itself the center of an international movement that would help to create modern Europe. 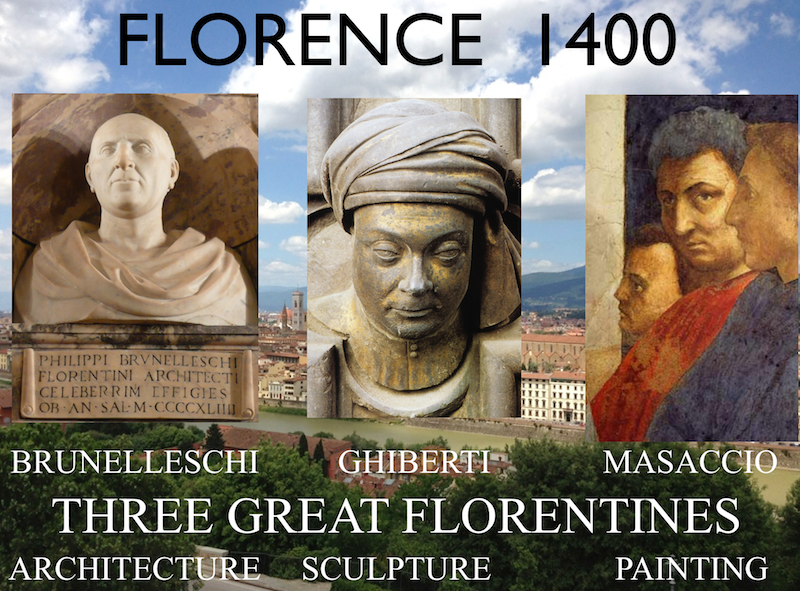 Amazon: Spanning an age that witnessed great achievements in the arts and sciences, this definitive overview of the Italian Renaissance will both captivate ordinary readers and challenge specialists. Dr. Plumb’s impressive and provocative narrative is accompanied by contributions from leading historians, including Morris Bishop, J. Bronowski, Maria Bellonci, and many more, who have further illuminated the lives of some of the era’s most unforgettable personalities, from Petrarch to Pope Pius II, Michelangelo to Isabella d'Este, Machiavelli to Leonardo. A highly readable and engaging volume, THE ITALIAN RENAISSANCE is a perfect introduction to the movement that shaped the Western world.

A useful book this week is the brilliant The Italian Renaissance by J. H. Plumb. This is a wonderful and succinct introduction to the Renaissance by one of our greatest historians, J. R. Plumb.

This is a wonderful book that is perfect for us as we spend a week talking about Brunelleschi and Renaissance Florence. I highly recommend it to you all. And now it is available in paperback ($13.00).

Born and raised in Canada, Ross King has lived in England since 1992. In 2002―03, two books of his were published in the United States, Domino, about the world of masquerades and opera in 18th century London and the New York Times bestselling Michelangelo and the Pope's Ceiling. Nominated for a National Book Critics Circle Award in 2003 in the category of critisicm, in Michelangelo and the Pope's Ceiling King tells the story of the four years―1508-1512.―Michelangelo spent painting the ceiling of the newly restored Sistine chapel. In this extraordinary book, he presents a magnificent tapestry of day-to-day life of the ingenious Sistine scaffolding and outside in the upheaval of early 16th century Rome. King’s highly acclaimed Brunelleschi’s Dome: How a Renaissance Genius Reinvented Architecture, was an instant hit in the U.S., landing on the New York Times, Boston Globe and San Francisco Chronicle bestseller lists and becoming a handselling favorite among booksellers. Brunelleschi’s Dome was chosen "The 2000 Book Sense Nonfiction Book of the Year" and a Book Sense 76 top ten selection.  Anyone familiar with Ross King’s writing knows that he has an astonishing knowledge of European cultural history. He originally planned a career in academia, earning his Ph.D. in English Literature and moving to England to assume a research position at the University of London.  King lives near Oxford, England, in the historic town of Woodstock, the site of Blenheim Palace. He is a devoted cyclist and hikes regularly in both the Pyrenees and the Canadian Rockies.

RECOMMENDED TEXTBOOK FOR THE YEAR

For the Renaissance in Florence see Honour, Chapter 10, beginning p. 416.