Roman Catholic 17th Century Spain was in close communication with Rome, and therefore Spanish artists picked up on the artistic revolution going on in Rome before anyone else. Spaniards went to Rome to study Caravaggio and brought back all his stylistic advances and some like Jose Ribera stayed in Italy for the rest of their careers. Caravaggio became one of the most widely imitated artists in the history of western art. After his untimely death in 1610, many Italian and non-Italian artists alike came to be considered his “followers,” even though they had never met the artist or worked alongside him. The most sensitive to Caravaggio was Velazquez who went twice and completely changed his style once he had absorbed Caravaggio in Rome. But other Spanish artists also continued the Caravaggio style (they were called "Caravaggisti") and Zurburan was called "The Spanish Caravaggio."

The magnificent still-life below by Francisco de Zurbarán is Still Life with Lemons,Oranges and a Rose. It is one of the greatest paintings to come out of 17th Century Spain. And fortunately for all of us we can get in a car and drive to LA and see it at the Norton Simon Museum. Zurbarán absorbed the magic of Caravaggio and then he blended it with the Spanish life and death themes to create something wholly Spanish and spectacularly beautiful. The poster for this has been one of the best-selling posters at the Norton Simon for years. Norman Bryson writes: "Lemons, Oranges, and a Rose shows a visual field so purified and so perfectly composed that the familiar objects seem on the brink of transfiguration or (the inevitable word) transubstantiation. Standing at some imminent intersection with the divine, and with eternity, they exactly break with the normally human." 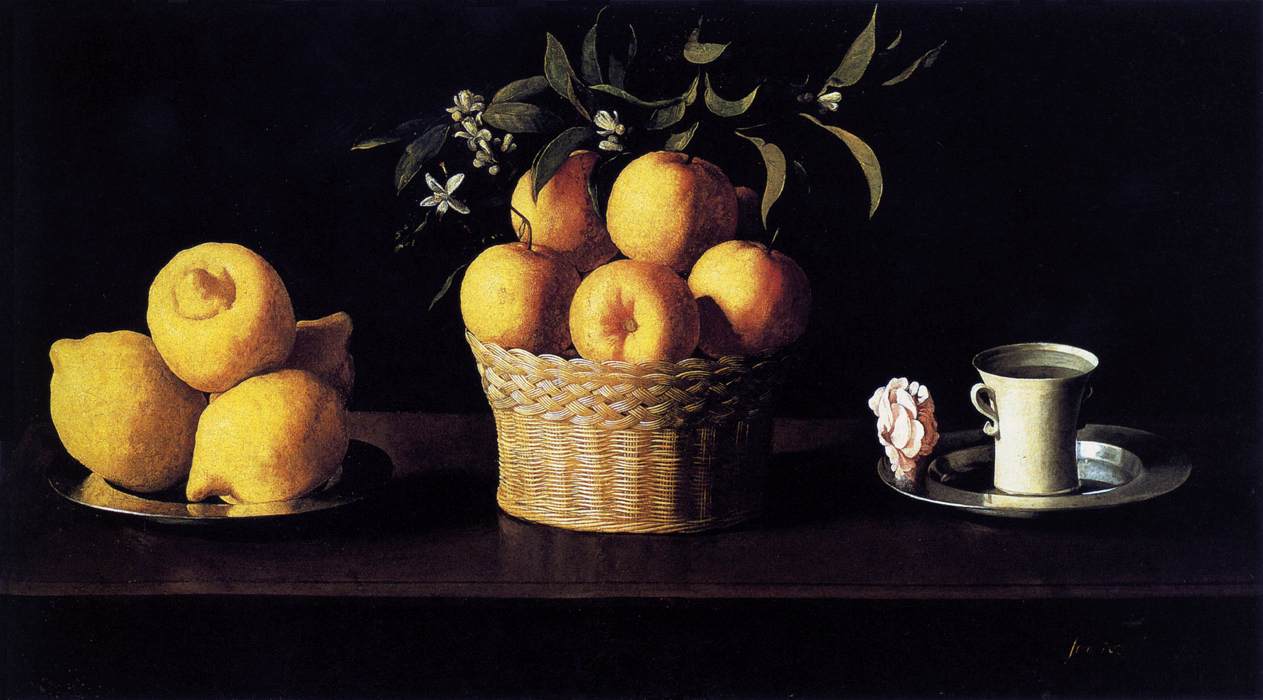 Our Hugh Honour/John Fleming book continues to serve us all this quarter.
Pages 588-591, Velázquez

Editorial Reviews:
This sumptuous book is the catalog for the once-in-a-lifetime U.S. exhibition of the 17th Century Spanish artist frequently called the greatest painter of all time. The gorgeous reproductions illustrate every painting in the exhibition, and the many close-up details reveal the fabulous brushwork that makes Velazquez truly a painter's painter. The introductory essays provide a foundation in the history of Spain during Velazquez's life and a biography of the artist combined with an overview of his art. Catalog entries thoroughly describe each painting in terms of subject matter, style, and provenance, as well as any scholarly differences of opinion regarding dating or authenticity. This is a major publication documenting an important exhibition and should be acquired by all libraries for their patrons who love painting at its best. --from Library Journal

Amazon Customer Review:
Trond Sigurdsen
5.0 out of 5 stars, Best book on Velazquez
Reviewed in the United States on August 3, 2007
I have several books on this supremely talented Spanish painter, and I have to say that this work is still the best on the subject. First, the text is very informative as to the life and times of Velazquez. Furthermore, the information on each painting is well written, and does not feel repetitive. However, the most important aspect of the book is the reproductions, which are (with one or two exceptions) the best you will find anywhere even today, seventeen years after the book was published!