Romanticism was a movement that began in the mid 18th Century in the writings of Jean-Jacques Rousseau in Paris. It spread rapidly all over Europe to Germany, England, and Italy. It began to appear in painting in the early 19th Century above all in the work of the young Eugène Delacroix. Eugène Delacroix was born on 26 April 1798, at Charenton-Saint-Maurice in Île-de-France, near Paris. His mother was Victoire Oeben, the daughter of the cabinet-maker Jean-François Oeben. He had three much older siblings. Charles-Henri Delacroix (1779–1845) rose to the rank of general in the Napoleonic army. Henriette (1780–1827) married the diplomat Raymond de Verninac Saint-Maur (1762–1822). Henri was born six years later. He was killed at the Battle of Friedland on 14 June 1807. There are medical reasons to believe that Eugène's legitimate father, Charles-François Delacroix, was not able to procreate at the time of Eugène's conception. Talleyrand, who was a friend of the family and successor of Charles Delacroix as Minister of Foreign Affairs, and whom the adult Eugène much resembled in appearance and character, considered himself as his real father. After assuming his office as foreign minister, Talleyrand dispatched Delacroix to The Hague in the capacity of French ambassador to the then Batavian Republic. Delacroix who at the time suffered from erectile dysfunction returned to Paris in early September 1797, only to find his wife pregnant. Talleyrand went on to assist Eugène in the form of numerous anonymous commissions. Throughout his career as a painter, he was protected by Talleyrand, who served successively the Restoration Bourbon government after Napoleon and King Louis-Philippe n the 1830's, and ultimately as ambassador of France in Great Britain, and later by Talleyrand's grandson, Charles Auguste Louis Joseph, duc de Morny, half-brother of Napoleon III and speaker of the French House of Commons. His legitimate father, Charles Delacroix, died in 1805, and his mother in 1814, leaving 16-year-old Eugène an orphan. Although the young Delacroix had emerged out of the highest circles of power in France, his personal nature and career directions turned him into a rebel—a Romantic rebel. He reveled against the perfectionism of the Neo-classical style that then dominated French art. Delacroix fearlessly attacked this stodgy old style with a new technique and new subjects. He moved away from all the Classical myths and instead wandered in North Africa where he found exciting subjects, colors, and stories. In the process he almost singlehandedly created a whole new artistic style. When he died in 1863, all his artistic children—Renoir, Monet, Degas, Cezanne, Pissarro, Morisot, Manet, Bazille, gathered at a massive Paris retrospective show that became legendary in the history of art. 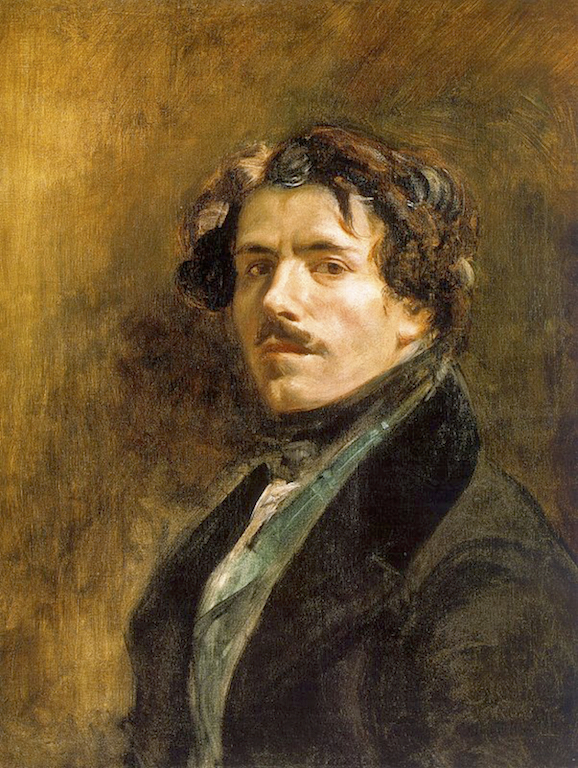