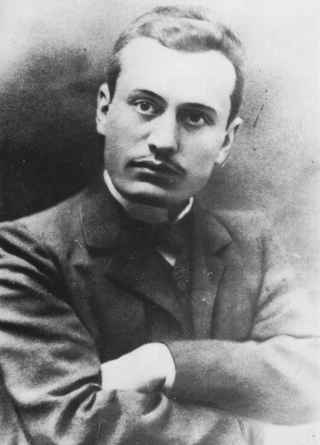 right time in our class to turn to the life of Benito Mussolini and to come to understand how his life and thought was rooted in the Risorgimento: what was achieved and what was not; where did the Risorgimento fail?  How did  the Italain state in the Twentieth Century find itself caught up in the horrors of Twentieht Century tyranny. Mussolin was born in a small town in the Romagna (a provincial name that echoes Rome but is a distinct area of norther Italy stretching east and west from Bologna.) near Forli. His father, Alessandro Mussolini was an extreme radical thinker in a very small town, who hated the church as much as he loved Garibaldi. Mussolini brought up his son in a household of hot political debate. All day all the time, they discussed and acted upon radical political motivations. The Mussolinis celebrated the "people" the "popolo." Alessandro Mussolini preached about the people and the rich nasty aristocrats who lived off of the poor and the downtrodden. So young Benito grew up in the middle of political debate. And he grew to be very good at it. HIs various breakthroughs into power were all  driven by his unique rhetorical power that was with him from the very beginning.

Our discussion of Mussolini may move you to want to know more about him. The best biography is this one by Christopher Hibbert.

Mussolini: The Rise and Fall of Il Duce,

From Amazon:
“Christopher Hibbert is a wonderful narrative historian who has illuminated many corners of Italian life and history. He has the gift of creating scenes and characters, of rendering the vividness of the past. His Mussolini is no exception. He manages to convey both the charisma and dilettantismo of Mussolini the revolutionary leader as well as the later folly of Il Duce, the dictator who began increasingly to believe his own rhetoric -- ''Mussolini is always right' -- in leading his country into World War and ruin.” ―Alexander Stille, award-winning author of Benevolence and Betrayal: Five Italian-Jewish Families Under Fascism, and of The Sack of Rome: Media + Money + Celebrity = Power = Silvio Berlusconi

Reviews:
“Hibbert is a remarkably prolific popular historian, who can take on almost anything, from Dickens to General Wolfe, from Agincourt to Garibaldi.” ―The Observer

“An excellent account...balanced and perceptive in outlook...well-written and entertaining.” ―Economist

“[Hibbert] is a superbly skillful historical writer.” ―The Spectator

“An adroitly written evocation of a compelling but enigmatic personality, a man whose ambition, idealism and opportunism would not seem out of place on the political scene today.” ―Publishers Weekly on Disraeli

The single best book in the English language to explain the power of Hitler and Mussolini with the crowds of followers and the power of their words is Eric Hoffer's brilliant The True Believer. The book is now more than fifty years old, and yet it is more relevant and more obviously true than when it was published in the 1950's. The secret of the dictators was that they knew how to touch the hearts of their trouble peoples and to engender in those hearts the willingness to sacrifice one's self to the larger cause. Hoffer explains what this was all about. The book is a masterpiece and is still read in universitie classes studying the mind and movements of the masses in the Twentieth Century. If you have never read it, this is the perfect time to do it.