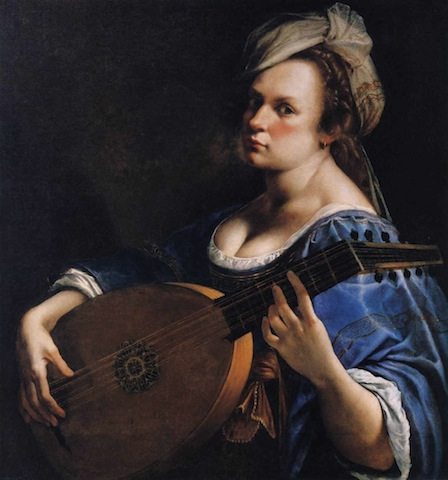 The career of Artemisia Gentileschi (see her self-portrait at the left) is testimony to how creative and energetic the cultural world of seventeenth-century Rome was. Artemisia was the first independent and successful woman painter of the modern world. Her art survives to tell us just how great a painter she was. But there is more. She was also an extraordinary woman who dared to take a man to court who raped her. And we know all about it. All the documents have survived. Thus we have an amazing look into the world of Italian justice in the seventeenth century. Artemisia was a great painter, a "Caravagisti" who grew up in the very neighborhood where Caravaggio had lived. But she is also a fascinating woman.

This is the best one-volume history of Italy that includes the modern part that we want. It provides you with a nice introduction to earlier periods and those of you who studied the Renaissance last year will find these chapters an easy review. You can read about the earlier periods a bit each week tip you get up to 1600. We will use the book all year.

From Library Journal
This book, which accompanies an exhibition currently at the Metropolitan Museum of Art in New York and traveling both to the St. Louis Art Museum and to the Museo di Palazzo di Venezia in Rome, is the first to examine in one volume both Orazio and Artemesia Gentileschi, father-and-daughter artists of 17th-century Italy. The catalog demonstrates that Orazio Gentileschi follows the Caravaggesque practice of painting from the model, which Artemesia in turn absorbed into her own painting methods. At the same time, curator Christiansen concludes that Orazio painted much more in the elegant style of classical painting in France and never accepted the Baroque idioms of drama and expressiveness that his daughter Artemesia wholeheartedly embraced in her painting. Also discussed in this catalog is the feminist aspect of Artemesia's position as a talented woman artist, the possibility that she was the model for her own "Susanna and the Elders" early in her career, and how her social environment and opportunities as a woman artist changed dramatically after her marriage and her move from Rome to Florence. This catalog also includes excellent color reproductions and previously unpublished documents relating to the trial of Orazio's colleague, Agostino Tassi, for raping Artemesia. The scholarly literature on these artists should be advanced considerably by this extremely comprehensive volume. Enthusiastically recommended for all libraries that support programs in art and art history. [Interested readers will also want to look at Susan Vreeland's The Passion of Artemisia, a fictional account of the artists reviewed in LJ 12/01. Ed.] Sandra Rothenberg, Framingham State Coll., MA
Copyright 2002 Cahners Business Information, Inc.