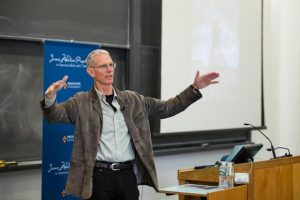 Josiah Ober is an American historian of ancient Greece and classical political theorist. He is Tsakopoulos-Kounalakis Professor in honor of Constantine Mitsotakis, and professor of classics and political science, at Stanford University. His teaching and research links ancient Greek history and philosophy with modern political theory and practice. Ober was educated at the University of Minnesota (B.A., major in history, 1975) and the University of Michigan (Ph.D., Department of History, 1980). He was a professor of ancient history at Montana State University (1980–1990), and then at Princeton University (1990–2006). He has received fellowships from numerous institutions, including the American Council of Learned Societies (1989–90); the National Endowment for the Humanities (1997); Center for Advanced Study in the Behavioral Science (2004-5). He delivered the 2002-2003 Sigmund H. Danziger, Jr. Memorial Lecture in the Humanities at the University of Chicago and the 2019 Sather Lectures University of California, Berkeley. Ober was a student of the distinguished American ancient Greek historian Chester Starr, and has been the teacher of many scholars, such as the classicist John Ma, ancient Greek historian Emily Mackil, and the political theorist Ryan Balot. In general, the scholarly community has greeted Ober’s work with praise. Mimis Chrysomalis’s review of The Rise and Fall of Classical Greece notes that in this ‘significant resource for scholars of classical antiquity, political science, and economic history’ Ober ‘offers a novel perspective on how economic performance was connected to . . . democratic institutions.’ Professor of law Adriaan Lanni’s review praises Rise and Fall as part of the ‘exciting (and controversial) recent developments’ in the ‘Stanford school of ancient history’and judges Ober’s arguments an ‘unusually compelling compilation of methods, data and argument in support of a broad thesis.’ Barton Swaim’s calls Demopolis: Democracy Before Liberalism a ‘tightly reasoned work of scholarship’ in his Wall Street Journal review.

SEE BELOW THE LINK TO THE PDF COPY OF PROFESSOR OBER’S LECTURE AT THE INSTITUTE ON FRIDAY DEC 6, 2019

Books by Ober include: