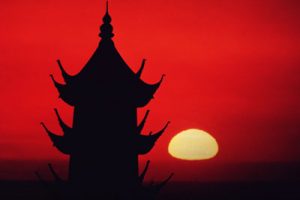 This summer, the Institute is pleased to offer a distinguished series of 6 lectures on the international and military history of China since the turn of the twentieth century.

Part 1 (July 16): The First Chinese Revolution ~ The overthrow of the Qing dynasty in 1911 was the climax of a century of internal and external crises in China. This lecture surveys that troubled history, and the efforts of the fledging Chinese Republic to establish itself. ENROLL

Part 2 (July 23): The Great East Asian and Pacific War ~ Japanese imperial ambition toward China was the principal cause of East Asia’s embroilment in the Second World War. This lecture explores the origins and course of the fighting in the Far East, with particular reference to the Chinese experience. ENROLL

Part 3 (July 30): The Triumph of the Communists ~ The victory of the Chinese communists under Mao Zedong is one of the cardinal political events of modern times. This lecture explains the communist success in military and political terms, and considers its broader consequences, above all for the United States. ENROLL

Part 4 (August 6): China’s Cold War I: The Sino-Soviet Alliance ~ China’s alliance with the Soviet Union defined its international position during the first half of the Cold War, a very dangerous period in which China emerges as a nuclear power and as a sponsor of revolutionary movements in Korea, Southeast Asia, and elsewhere. ENROLL

Part 5 (August 13): China’s Cold War II: China’s America Policy ~ The rapprochement between China and the United States beginning in the 1970s reshaped the international system, and provided the framework for the economic and political reforms that followed the death of Mao. ENROLL

Part 6 (August 20): China Among the Powers ~ China is a major beneficiary of the political and economic conditions created by the unwinding of the Cold War. This lecture discusses China’s re-emergence as a major power in Asia and as a potential rival and partner of the United States internationally. ENROLL

Daniel J. Moran is Professor of National Security Affairs at the Naval Postgraduate School in Monterey, California. He was educated at Yale and Stanford Universities, and has also been a member of the Institute for Advanced Study at Princeton, and Professor of Strategy at the Naval War College in Newport, Rhode Island. Dr. Moran teaches courses and supervises doctoral research in strategic theory, American foreign relations, and the history of war and international relations since the end of the nineteenth century.

Doors open at 6:15 PM before each lecture
for wine, goodies, and dessert.