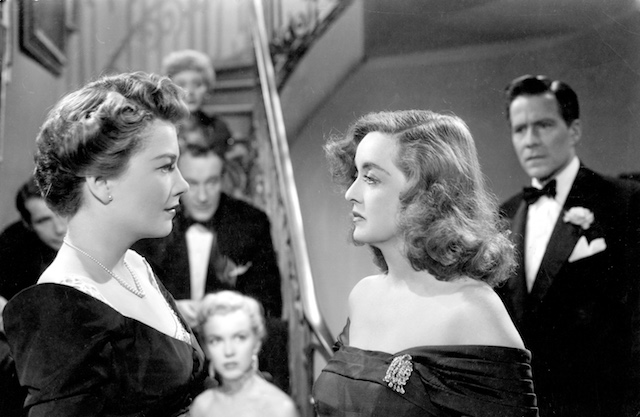 This is one of the best movies Hollywood ever made. It is tight, brilliant, Oscar winning performances by everyone, a great script and Bette Davis. Was she ever better? Here is Wikipedia quick review:All About Eve is a 1950 American drama film written and directed by Joseph L. Mankiewicz (the best thing he ever made), and produced by Darryl F. Zanuck. It was based on the 1946 short story “The Wisdom of Eve” by Mary Orr, although screen credit was not given for it. The film stars Bette Davis as Margo Channing, a highly regarded but aging Broadway star. Anne Baxter plays Eve Harrington, an ambitious young fan who insinuates herself into Channing’s life, ultimately threatening Channing’s career and her personal relationships. George Sanders, Celeste Holm, Hugh Marlowe, Barbara Bates, Gary Merrill, and Thelma Ritter also appear, and the film provided one of Marilyn Monroe’s earliest important roles. Praised by critics at the time of its release, All About Eve was nominated for 14 Academy Awards (a feat unmatched until the 1997 film Titanic) and won six, including Best Picture. As of 2015, All About Eve is still the only film in Oscar history to receive four female acting nominations (Davis and Baxter as Best Actress, Holm and Ritter as Best Supporting Actress). All About Eve was selected in 1990 for preservation in the United States National Film Registry and was among the first 50 films to be registered. All About Eve appeared at #16 on AFI’s 1998 list of the 100 best American films.