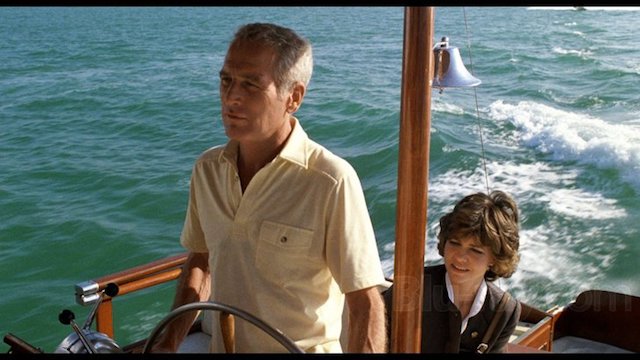 Absence of Malice is a 1981 film which tells the story of Michael Gallagher (Paul Newman), the son of a dead Mafia boss who discovers that he has become a front-page story in the local Miami newspaper, indicating that he is being investigated for a murder he didn’t commit. Sally Field is the reporter who creates the story. As their worlds start to coincide, the ethics of journalism are tested, including how close a reporter should get to his or her source. The movie also stars Bob Balaban as an ambitious and unscrupulous Assistant United States Attorney, Melinda Dillon as a troubled friend of Gallagher’s, and Wilford Brimley as a senior U.S. Department of Justice official. The movie was written by Kurt Luedtke and David Rayfiel (uncredited) and directed by Sydney Pollack. It was nominated for Academy Awards for Best Actor in a Leading Role (Newman), Best Actress in a Supporting Role (Dillon) and Best Writing, Screenplay Written Directly for the Screen. Paul Newman and Sally Field, though somewhat opposites both in their roles as Michael Colin Gallagher and Megan Carter respectively and in real Hollywood life (Newman was East coast, Sally a Hollywood power), mesh and make believable partners. Megan tells Michael that she is 30 something and doesn’t need courting to play in the hay. Michael retorts, “Maybe I do,” and drives away. Then along comes Wilford Brimley in a bit part and runs away with the show. That’s saying a lot since the well chosen cast gives it all they’ve got including ace jobs by Bob Balaban and Melinda Dillon. The essence of the film is “What is the nature of truth?” What we read in the paper ain’t necessarily so. Jibes are poked at bureaucrats too who certainly have problems determining what is truth.

Roger Ebert: In the newspaper business we’re quick to spot the errors in movies about newspaper reporters, but where were we when the archaeologists squirmed over Harrison Ford’s barbaric conduct in Raiders of the Lost Ark? The fact is, this movie is really about a woman’s spunk and a common man’s sneaky revenge. And on that level it’s absorbing and entertaining. Sally Field’s newspaper reporter is created through a quietly original performance that is not Norma Rae with a pencil behind her ear, but is an earnest, nervous, likable young woman who makes mistakes when she listens too closely to her heart, her ambition, or her editor (which of us cannot admit the same?) Paul Newman’s character is a liquor distributor who is (presumably) totally innocent of the murder for which he is being investigated. But because his father was a Mafioso, he finds his name being dragged through the press, and he achieves a vengeance that is smart, wicked, appropriate, and completely satisfying to the audience. Besides these two performances, there are some other good ones, most notably one by Wilford Brimley, as a lawman who takes brusque command of an informal hearing and reduces everyone but Newman to quivering surrender, and another by John Harkins, as a newspaper libel lawyer who is able to make the restraints (and freedoms) of libel law clear not only to Sally Field but even to us. There’s a story about a legendary Chicago editor who was presented with a major scoop obtained by dubious means. First he convinced himself the story was factually sound. Then he issued the classic instruction: “Print it tonight, and call the lawyers in the morning.” For the full review go to https://www.rogerebert.com