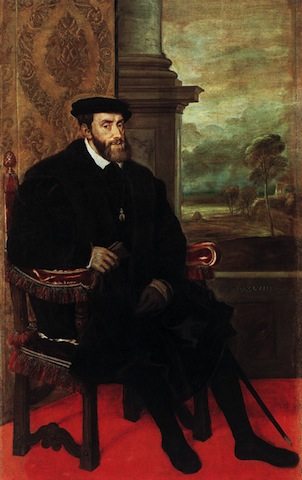 The portrait of Charles V that you see at the left was painted by Titian and is currently on view in the Prado in Madrid. Charles V (and also at the same time King Carlos I of Spain) was the single most important, the most powerful, the most dominant personality of the sixteenth century in Europe. Charles lived from 1500 to 1558 and thus he dominated the whole first half of the century and his influence continued through the rest of the century through the person of his son King Philip II who was his student in the intricacies of 16th century government and followed his policies loyally. Charles’s biography is the story of someone who grew up in many states and using many languages, but who in the last years of his life became more and more Spanish. He became the most elegant, the most powerful and the best educated Renaissance Man of the century.