King Charles I of Spain 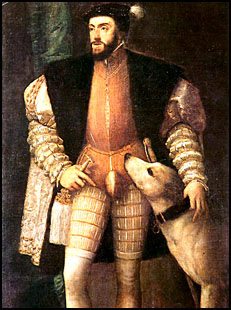 Wikipedia: Holy Roman Emperor Charles V (Spanish: Carlos I de España) born 24 February 1500, died 21 September 1558, was ruler of the Holy Roman Empire from 1519 and, as Charles I, of the Spanish Empire from 1516 until his voluntary retirement and abdication in favor of his younger brother Ferdinand I and his son Philip II in 1556. As the heir of three of Europe's leading dynasties—the House of Habsburg of the Habsburg Monarchy; the House of Valois-Burgundy of the Burgundian Netherlands; and the House of Trastámara of the Crowns of Castile and Aragon—he ruled over extensive domains in Central, Western, and Southern Europe; and the Spanish colonies in North, Central, and South America, the Caribbean, and Asia. Charles was the eldest son of Philip the Handsome and Joanna the Mad. When Philip died in 1506, Charles became ruler of the Burgundian Netherlands, and his mother's co-ruler in Spain upon the death of his maternal grandfather, Ferdinand the Catholic, in 1516. As Charles was the first person to rule Castile-León and Aragon simultaneously in his own right, he became the first King of Spain (Charles co-reigned with his mother Joanna, which was however a technicality given her mental instability). In 1519, Charles succeeded his paternal grandfather Maximilian as Holy Roman Emperor and Archduke of Austria. From that point forward, Charles's realm, which has been described as "the empire on which the sun never sets", spanned nearly four million square kilometers across Europe, the Far East, and the Americas. Much of Charles' reign was devoted to the Italian Wars against the French king, Francis I, and his heir, king Henry II, which although enormously expensive, were militarily successful due to the undefeated Spanish tercio and the efforts of his prime ministers Mercurino Gattinara and Francisco de los Cobos y Molina. Charles' forces re-captured both Milan and Franche-Comté from France after the decisive Habsburg victory at the Battle of Pavia in 1525, which pushed Francis to form the Franco-Ottoman alliance. Charles' rival Suleiman the Magnificent conquered Hungary in 1526 after defeating the Christians at the Battle of Mohács. However, the Ottoman advance was halted after they failed to capture Vienna in 1529. Aside from this, Charles is best known for his role in opposing the Protestant Reformation. In addition to the German Peasants' War against the Empire, several German princes abandoned the Catholic Church and formed the Schmalkaldic League in order to challenge Charles' authority with military force. Unwilling to allow the same religious wars to come to his other domains, Charles pushed for the convocation of the Council of Trent, which began the Counter-Reformation. The Society of Jesus was established by St. Ignacio de Loyola during Charles' reign in order to peacefully and intellectually combat Protestantism, and continental Spain was spared from religious conflict largely by Charles' nonviolent measures. In Germany, although the Protestants were personally defeated by Charles at the Battle of Mühlberg in 1547, he legalized Lutheranism within the Holy Roman Empire with the Peace of Augsburg. Charles also maintained his alliance with Henry VIII of England, despite the latter splitting the Church of England from Rome and violently persecuting Catholics. In the New World, Charles oversaw the Spanish colonization of the Americas, including the conquest of both the Aztec Empire and the Inca Empire. The rapid Christianization of New Spain was attributed to the miracle of Our Lady of Guadalupe. Uncomfortable with how his viceroys were governing the Americas vis-à-vis the Native Americans, Charles consulted figures such as Francisco de Vitoria and Bartolomé de las Casas on the morality of colonization which las Casas vehemently opposed with his Brevísima relación de la destrucción de las Indias A Short Account of the Destruction of the Indies. Charles V also provided five ships to Ferdinand Magellan and his navigator Juan Sebastián Elcano, after the Portuguese captain was repeatedly turned down by Manuel I of Portugal. The commercial success of Magellan's voyage (the first circumnavigation of the Earth) temporarily enriched Charles by the sale of its cargo of cloves and laid the foundation for the Pacific oceanic empire of Spain, and along with Ruy López de Villalobos, began Spanish colonization of the Philippines. Though always at war, Charles was essentially a lover of peace, and all his wars were virtually defensive. "Not greedy of territory", wrote Marcantonio Contarini in 1536, "but most greedy of peace and quiet." Charles retired in 1556. The Habsburg Monarchy passed to Charles' younger brother Ferdinand, whereas the Spanish Empire was inherited by his son Philip II. The two empires would remain allies until the 18th century.

The Reign of Charles V,

The Reign of Charles V is an important new study of one of the most important rulers in world history. As the Holy Roman Emperor and King of Spain during the mid-1500s, Charles V ruled the first truly global empire and was the greatest of all the Habsburg Emperors. He was responsible for, among other things, the conquests of Mexico and Peru and the consequent European influence on Latin America, the waning of the Renaissance, the religious transformation of Europe by the Protestant and Catholic Reformations, and the establishment of a Habsburg empire in Eastern Europe.William Maltby's engaging new study not only looks at the emperor as a person, but also examines such important critical issues as his policies and their consequences. Concise and readable, The Reign of Charles V provides an indispensable introduction to an era that changed the world. William Maltby is Professor of History Emeritus at the University of Missouri, St. Louis. He has served as Executive Director of the Center for Reformation Research and has written extensively on various aspects of early modern history.

The Habsburgs: To Rule the World,

The definitive history of a powerful family dynasty who dominated Europe for centuries -- from their rise to power to their eventual downfall.