1494: the Year the French Discovered Italy 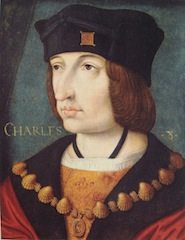 In the last decade of the fifteenth century, the vigorous young King of France seized upon a murky genealogical circumstance to pursue his family's dubious right to the kingdom of Naples. Resisting considerable domestic and international pressure, he assembled the biggest, best-trained, and best-equipped army that Europe had seen since the days of the Roman Empire and pushed over the Alps and descended onto the great plain of the Po.

The coming of the French to Italy, something that had been feared, recommended, debated, and denounced for all of the fifteenth century, moved two Italians forward to share the center stage with King Charles VIII for these early critical days of the invasion: Ludovico Sforza, ruler of Milan, and Piero de' Medici, ruler of Florence. The progress of the French would depend upon the positions taken by these two unpredictable leaders. Ostensibly, Ludovico supported the French and Piero opposed them, but as the days of the invasion passed, the complex relationship between these three men showed how much more there was to the situation than this simple statement of alliances.

The conflict between France and the various independent states that ruled the Italian peninsula in the fall of 1494 is fascinating, but equally intriguing is the personal battle between these three men and the way that they maneuvered their forces, schemed and flattered, conspired and lied, drove ahead and retreated, won and lost, as they attempted to retrieve from the horrors and complexities of this massive invasion their own political power and the tranquility of their state. This personal drama climaxed at the small Tuscan town of Santo Stefano di Magra where for one brief moment the three men met in the midst of their disturbing battle and then went off in three different directions never to meet again.

Behind the clashing egos we find the emergence of a whole new world. As the European mind was undergoing a radical change in the conception of the globe provoked by the news brought back to Spain by Columbus, so now one year after the explorer's return from the Caribbean, the expedition of King Charles VIII and the Italian response to it provoked a radical change within the whole system of European states leaving everything forever transformed. Let us observe this extraordinary moment and witness there the birth of modern diplomacy, modern government, and modern war.

Here is an excellent general history of France that will be very useful for our entire year.

"[Horne] is a virtuoso of the character sketch and the illuminating vignette. . . . La Belle France, with its refreshingly subjective style, possesses more treasures than a whole wall full of textbooks."

"A breathtaking tour of French history, from its earliest kings through the Mitterrand government. . . . There are few countries with a more fascinating history than France."

"A useful and charming introduction to a nation that has oh-so-definitely helped make the modern world what it is. . . . Horne does a service in helping the reader navigate the complexities of French history."

The Winter Quarter of "History of France" is devoted to the centuries between 1300 and 1600: the era of the Renaissance and the Reformation.  We will meet the great monarchs of this age, Louis XI, Francis I and Henry IV, and the brilliant members of their courts as well as their lovers, their wives, and their mothers.  Two great women dominate much of this period: Joan of Arc, and Catherine de' Medici.