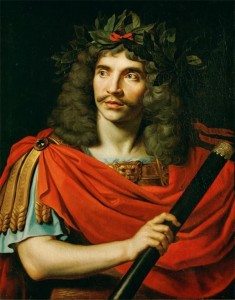 Jean-Baptiste Poquelin, mostly known by his stage name Molière, (January 15, 1622 to February 17, 1673) was a French playwright and actor who is considered one of the greatest masters of comedy in Western literature. Among Molière’s best-known dramas are Le Misanthrope (The Misanthrope), L’École des femmes (The School for Wives), Tartuffe ou L’Imposteur, (Tartuffe or the Hypocrite), L’Avare ou L’École du mensonge (The Miser), Le Malade imaginaire (The Imaginary Invalid), and Le Bourgeois gentilhomme (The Bourgeois Gentleman). Born into a prosperous family and having studied at the Collège de Clermont (now Lycée Louis-le-Grand), Molière was well suited to begin a life in the theatre. Thirteen years as an itinerant actor helped him polish his comic abilities while he began writing, combining Commedia dell’Arte elements with the more refined French comedy.

At the right is a portrait of Molière by Nicholas Mignard in the role of Julius Caesar.  This painting is now in the Carnavalet Museum, Paris.

We will read Tartuffe.

The Misanthrope, Tartuffe, and Other Plays,