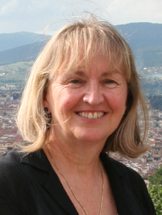 Hester was born in Northern Ireland, grew up in Pennsylvania, and studied fine arts at Queens College in New York. She has been employed in art, television and film production, and law. She has served in civic and philanthropic work, including the maintenance of a law library and the formation of the art docent library at the Cantor Art Center at Stanford University. She became the librarian for the newly formed Institute in 2003, focusing on library development. She has also been a featured artist at Institute art exhibitions.