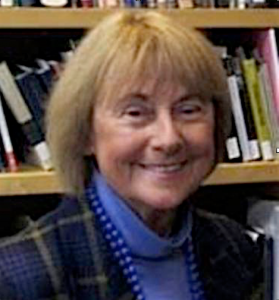 Arlene Okerlund, Professor of English, Emeritus, at San José State University, specializes in Shakespeare and in Medieval/Renaissance studies. She twice taught in SJSU’s Semester-Abroad-in-England where she loved studying Shakespeare and English history on site. During retirement she has published biographies of England’s first Yorkist queen (Elizabeth: The Slandered Queen) and the first Tudor queen (Elizabeth of York)–both available in paperback. During retirement, Professor Okerlund began taking banjo lessons and plays tenor banjo with the Peninsula Banjo Band. Professor Okerlund has lectured regularly at the Institute for the Study of Western Civilization on Shakespeare for five years.

Professor Okerlund’s dedication to Shakespeare has led her to establish a fund at San Jose State University to help finance the continued teaching of Shakespeare at the college. This endowment will assure that the works of William Shakespeare will always be taught at San José State University. Interest from the principal will pay the salary of a resident professor who will teach “both the textual and performance aspects of Shakespeare’s drama.”

Contributions may be sent to The Tower Foundation (a 501(c)-3 entity) at SJSU.

Checks should be made out to:
SJSU Tower Foundation
Memo: Arlene Okerlund Professor for Shakespeare Studies

The memo line is crucial to designate which of the many endowments managed by the Tower Foundation should receive the funds.

SEE BELOW A LINK TO A TIMELINE OF SHAKESPEARE PREPARED BY PROF. OKERLUND
Shakespeare Bio