The Ides of March

The assassination of Julius Caesar on March 15, 44 BC by a conspiracy of powerful Roman politicians ended the Republic. We will never know whether Caesar himself was intending to end the Republic and assume total dictatorial power. His enemies thought that was exactly what he intended. Some, like Cicero, approved the deed after it was done, but knew nothing about the plot beforehand. His reaction is recorded in his letters written immediately after the murder and recounting the days after March 15, when important young men such as Brutus debated what to do next.

Caesar: Life of a Colossus, 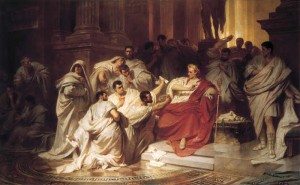