Cato the Elder and the Republic 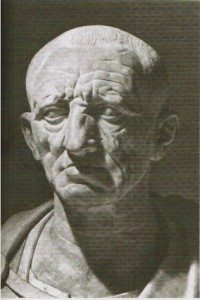 Cato and the Republic

Cato the Elder, who lived from 234 BC to 149 BC, was the most important voice of the Republic before the age of Cicero.  Cato lived during the growth of the Republic, as it increased in size and began to dominate the peninsula.  Once Rome gained control of the Italian peninsula, it was inevitably thrust into competition with the one other great state in the western Mediterranean, Carthage.  Here is a brief Wikipedia introduction to the the story of Cato:

Marcus Porcius Cato (234 BC, Tusculum, to 149 BC) was a Roman statesman, commonly referred to as Censorius (the Censor), Sapiens (the Wise), Priscus (the Ancient), Major, Cato the Elder (to distinguish him from his great-grandson, Cato the Younger), or Cato the Censor.  He was known for his conservatism and opposition to Hellenization. He came of an ancient Plebeian family whose members were noted for some military service but not for the discharge of the higher civil offices. He was bred, after the manner of his Latin forefathers, to agriculture, to which he devoted himself when not engaged in military service. However, having attracted the notice of Lucius Valerius Flaccus, he was brought to Rome, where he successively held the offices of Cursus Honorum: Military Tribune (214 BC), Quaestor (204 BC), Aedile (199 BC), Praetor (198 BC) (when he expelled the usurers from Sardinia), Consul (195 BC), together with his old patron, and finally Censor (184 BC), when he tried to preserve the mos majorum (ancestral custom) and combat "degenerate" Hellenistic influences.

The Law of the Twelve Tables (Latin: Leges Duodecim Tabularum or Duodecim Tabulae) was the ancient legislation that stood at the foundation of Roman law. The Law of the Twelve Tables formed the centrepiece of the constitution of the Roman Republic and the core of the mos maiorum (custom of the ancestors). The Twelve Tables came about as a result of the long social struggle between patricians and plebeians. After the expulsion of the last king of Rome, Tarquinius Superbus, the Republic was governed by a hierarchy of magistrates. Initially only patricians were eligible to become magistrates. this rule, among others, was a source of discontent for plebeians. In the context of this unequal status, plebeians would take action to secure concessions for themselves using the threat of secession. They would threaten to leave the city with the consequence that it would grind to a halt, as the plebeians were Rome's labour force. One of the most important concessions won in this class struggle were the Twelve Tables, which established basic procedural rights for all Roman citizens. Patricians long opposed this request, but around 451 BC, the first decemviri (decemvirate - board of ten men) was appointed to draw up the first ten tables. According to Livy, they sent an embassy to Greece to study the legislative system of Athens, known as the Solonian Constitution, and also to find out about the legislation of other Greek cities. Modern scholars believe the Roman assembly most likely visited the Greek cities of Southern Italy and did not travel all the way to Greece. In 450 BC, the second decemviri started work on the last two tables. The first decemvirate completed the first ten codes in 450 BC. Here is how Livy describes their creation, "...every citizen should quietly consider each point, then talk it over with his friends, and, finally, bring forward for public discussion any additions or subtractions which seemed desirable." (cf. Liv. III 34) In 449 BC, the second decemvirate completed the last two codes, and, after a secession plebis to force the Senate to consider them, the Law of the Twelve Tables was formally promulgated. The Twelve Tables were drawn up on twelve ivory tablets (Livy says bronze) which were posted in the Roman Forum so all Romans could read and know them. It was not a comprehensive statement of all law, but a sequence of definitions of various private rights and procedures. They generally took for granted such things as the institutions of the family and various rituals for formal transactions. It is surprising that the original text of such an important document has been lost. The original tablets were destroyed when the Gauls under Brennus burnt Rome in 390 BC. There was no other official promulgation of them to survive, only unofficial editions. What we have of them today are brief excerpts and quotations from these laws by different authors.

PERSONALITY AND THE GROWTH OF ROMAN LAW 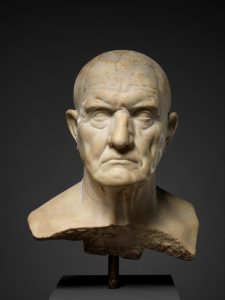