The building of France into one of the most important nations of Europe took place under the leadership of the Capetian kings whose dynastic roots could be traced back to the Carolingians. This new dynasty, like others in Europe, led the French nation out of the chaos of the eighth century toward a new national unity organized around the new feudal monarchies. The nature of these new feudal states was visible by around 1100. In this moment these confident young feudal states adopted an artistic style that both remembered their Roman roots in its name, “Romanesque,” and proclaimed a new Christian culture and artistic style. This new world of the Romanesque that flourished in the eleventh and twelfth centuries received its most perfect embodiment at Vezelay in Burgundy. On this evening we will discuss the new feudal state of France and then visit Vezelay.

Vézelay: Vézelay’s hilltop location has made it an obvious site for a town since ancient times. According to legend, not long before the end of the first millennium a monk named Baudillon brought relics (bones) of Mary Magdalene to Vézelay from Saint-Maximin-la-Sainte-Baume. In 1058, the Pope confirmed the genuineness of the relics, leading to an influx of pilgrims that has continued to this day. Vézelay Abbey was also a major starting point for pilgrims on the Way of St. James to Santiago de Compostela, one of the most important of all medieval pilgrimage centres. This was crucially important in attracting pilgrims and the wealth they brought to the town. Bernard of Clairvaux preached the Second Crusade at Vézelay in 1146. In 1189, the Frankish and English factions of the Third Crusade met at Vézelay before officially departing for the Holy Land. 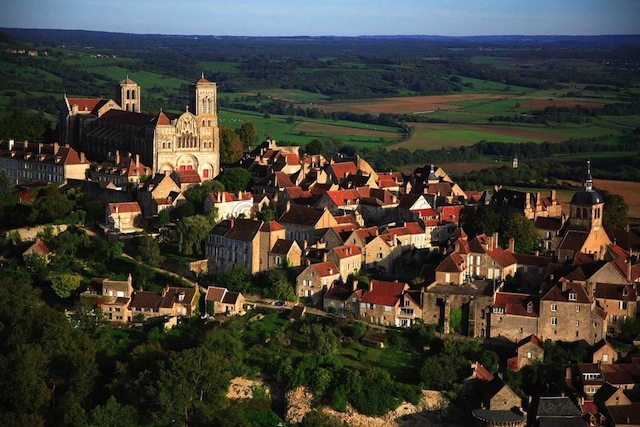